Late summer is a challenging time to bird. The local nesters have finished raising their families and have grown quiet and harder to see. Most southbound migrants have not arrived yet. The weather is hot and many parks are crowded. The biggest return on your birding investment this time of year is shorebirds. Southbound migrants are showing up in good numbers and species diversity is increasing. Here are few shorebirds from the past week. 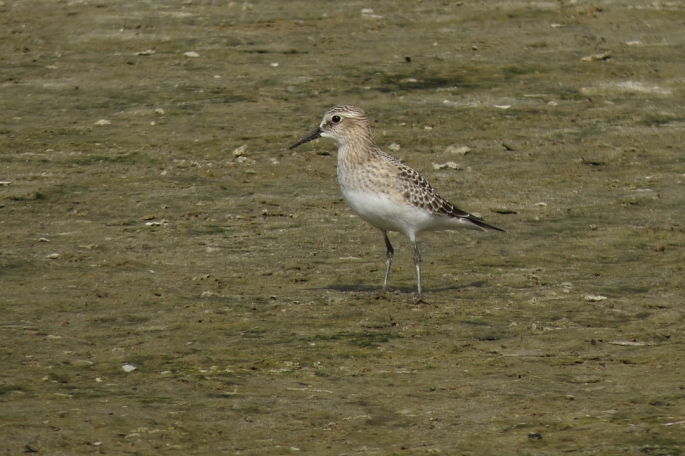 Baird’s Sandpiper, Gearhart. Most individuals of this species migrate through the Great Plains and the Rocky Mountains, but Oregon always gets a few juveniles that head a little too far west.

Semipalmated Plover, Fort Stevens SP. While these adorable little plovers can be found anywhere in migration, a great many are found working the coastal beaches.

Surfbird, Seaside. Surfbirds are also regular at the Cove, still sporting a little of their breeding plumage.

Killdeer, Fernhill Wetlands. Not a migrant, but Killdeer still counts on a shorebird list.

Shorebird numbers should continue to build for the next couple of weeks, and by then we should start seeing some other migrants as well.

I made a trip out to the coast to scout for my shorebird class. Much of the trip consisted of running from site to site to check on conditions, but I did spend a little time at a few sites where the birds presented some nice close views.

Parking Lot C at Fort Stevens had a lot of young Brown-headed Cowbirds flying around. It always amazes me how cowbirds can be raised by other species but still somehow figure out how to be cowbirds.

This young cowbird had a nice yellowish cast to the underparts. 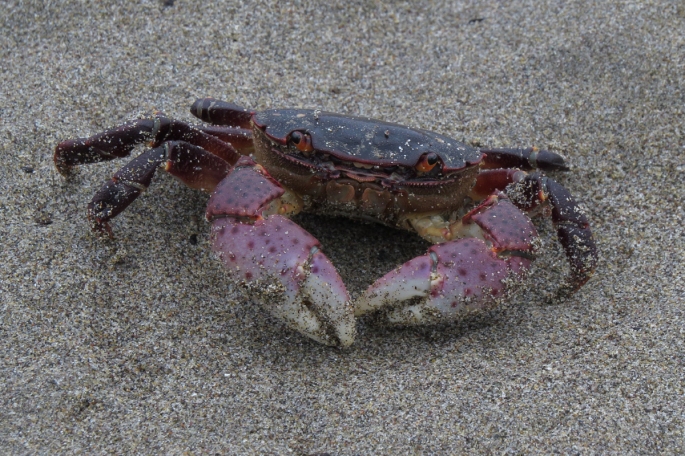 This Purple Shore Crab was out in the open near the tidal ponds at Parking Lot C. 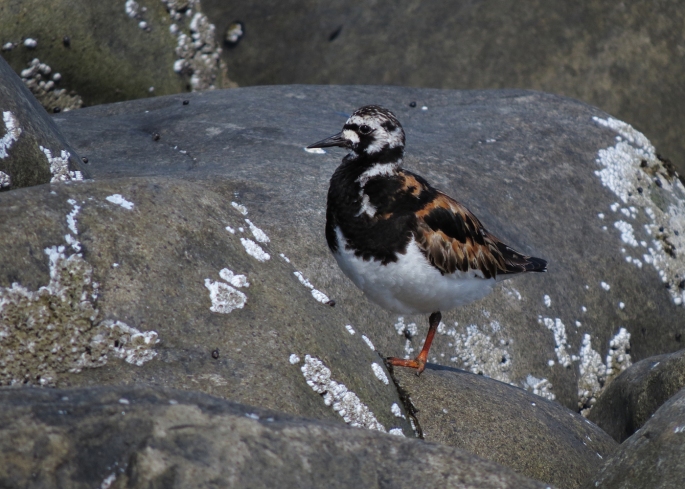 This Ruddy Turnstone was hanging out with the Black Turnstones at Seaside Cove. Ruddys are harder to find during autumn migration than they are in the spring. 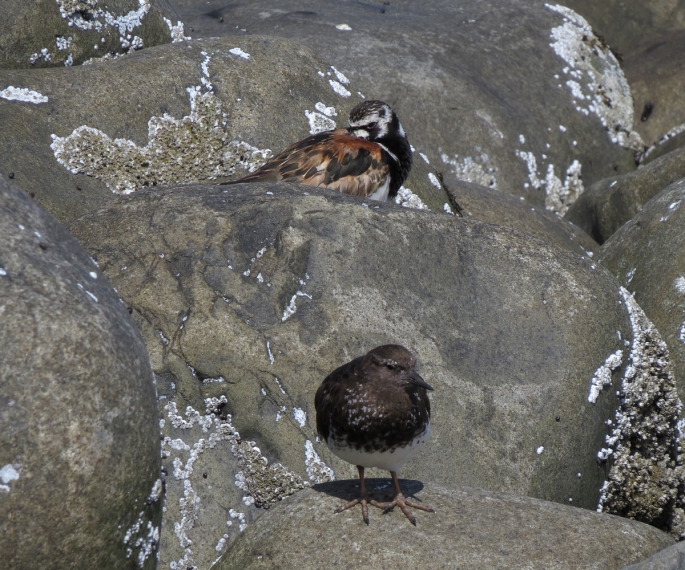 Black Turnstones are common at the Cove from autumn through spring.

A few Surfbirds are often mixed in with the turnstone flock.

Late summer and early fall sees a buildup of California Gulls along the coast, often in very worn and tattered plumage. So I was surprised to see this individual still rocking some very intense colors in the eye-ring and gape.

Heermann’s Gulls are always a favorite. 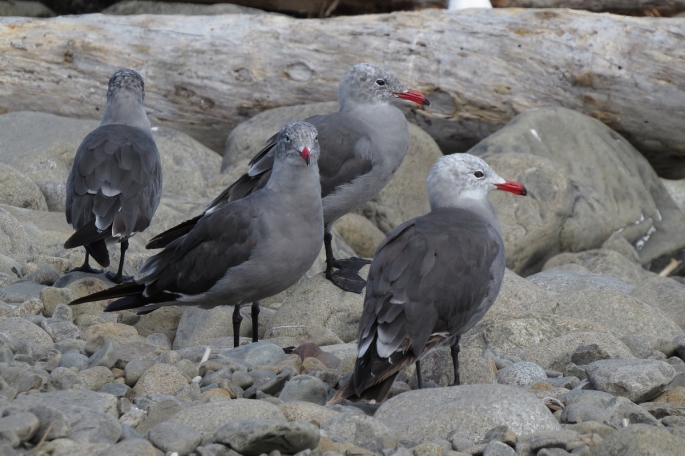 I didn’t find any juvenile Heermann’s on this trip. They experienced nearly complete nesting failures in recent years. Hopefully they had a little more success this year and we will see some young birds as the season wears on.

The Cove, in Seaside, is unique on the northern Oregon coast for the cobbles and boulders that make up its beach. These gray stones regularly attract three species that are more difficult to find elsewhere; Heermann’s Gull, Surfbird, and Black Turnstone. The color of the stone, light gray when dry, dark gray when wet, match these birds so well that individuals can be hard to see if they are sitting still. Add some cloud cover and you have a nearly monochromatic scene of birds, stone, sea, and sky.

This Surfbird was calling loudly, perhaps uncomfortable being surrounded by Black Turnstones. 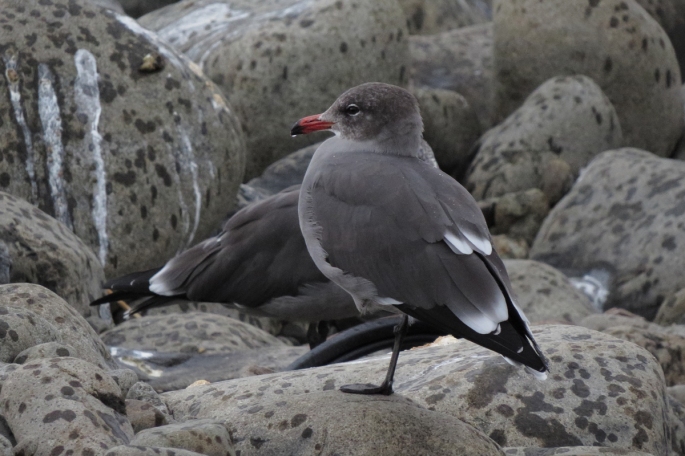 Heermann’s Gulls would be harder to see if they didn’t have that blood-red bill.

In breeding season, Heermann’s Gulls have white heads, but most birds acquire gray plumage on the head before they arrive in Oregon after breeding much farther south.

While I think adult Heermann’s are among the most beautiful gulls in North America, the first cycle birds are equally stunning in their smooth chocolate brown plumage. This is the first time in three years that I have seen a young Heermann’s Gull. The two years previous saw a near-total nesting failure for this species. Warmer ocean temperatures reduce the amount of food available to feed nesting seabirds.

Sticking out like a sore thumb with his white head and breast is this Western Gull. Note the massive bill on this bird. Gull diversity will be increasing on the coast in the next few weeks, much to the delight of gull fans like me.

A recent trip to the coast on a sunny and windy day resulted in these images of shorebirds using rocky habitats. Two of these species are usually found on rocks, but the other two are not. I wonder if the blowing sand had driven these birds to the relatively sheltered rocky areas. 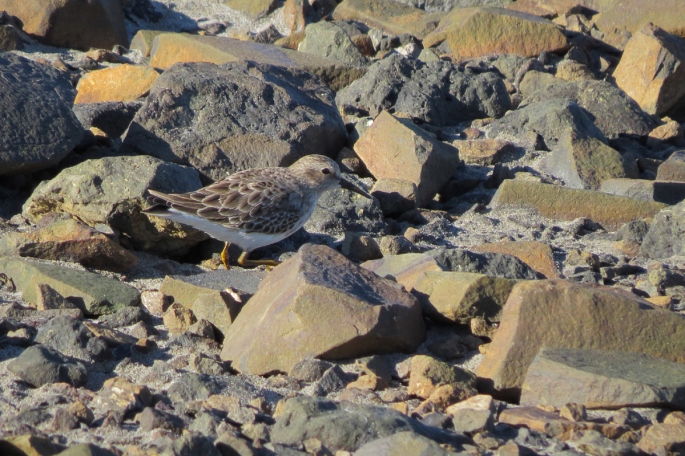 Least Sandpipers are hard to spot among the rocks. This bird was part of a small flock near the jetty at Fort Stevens.

This Dunlin was hanging out on a line of rocks near the same jetty. I have seen Dunlin here before.

Surfbirds at the Seaside Cove. Their color closely matches the dry basalt boulders. 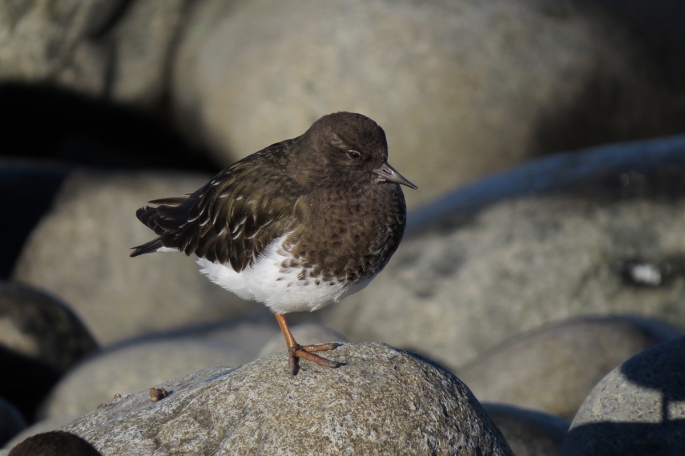 Black Turnstones are common winter residents at the Seaside Cove. 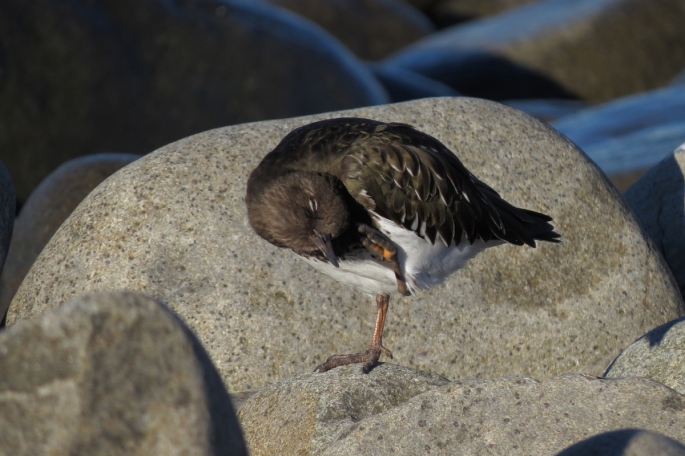 Once again, here are a few photos from the past few weeks’ ramblings.

While one can admire the adorableness of this Black-capped Chickadee, the real bird of interest is his drinking buddy in the background, a Pine Siskin. Siskins were pretty much non-existent last year as their population took a big downturn (as it does every few years). This fall has brought good numbers of Pine Siskins to the Willamette Valley already, so it looks to be a good year for them.

This Short-eared Owl flushed from Broughton Beach and flew out over the Columbia River before heading downstream. Short-eareds winter at this site with some regularity. I felt bad about flushing the bird. If she had just sat still, I probably would have walked right by and not seen her. I would think that birds who roost in such a high-traffic area would learn to adjust to passers-by.

My gull class went to the coast last weekend. We found nine species of gull, one less than last year but still great diversity. One of the first was this first cycle Ring-billed Gull. 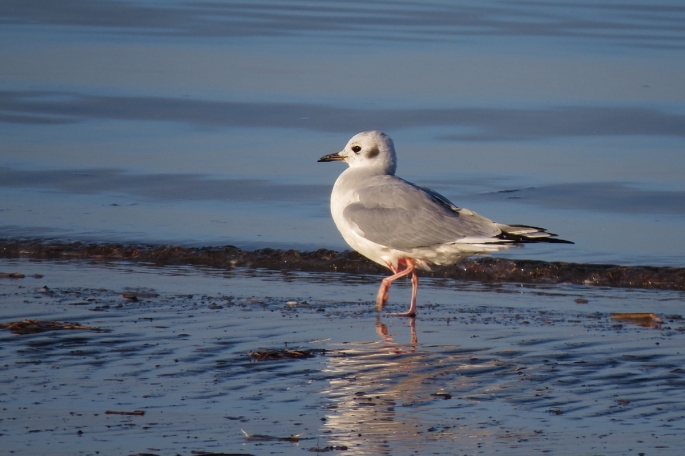 Bonaparte’s Gulls get the award for cutest gull on the Oregon coast. 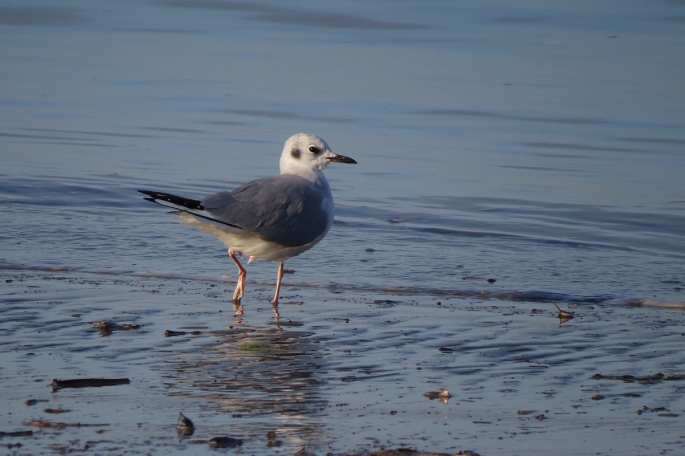 Even though they lose their black hoods in winter, you can still see the white eye crescents when they turn just so. 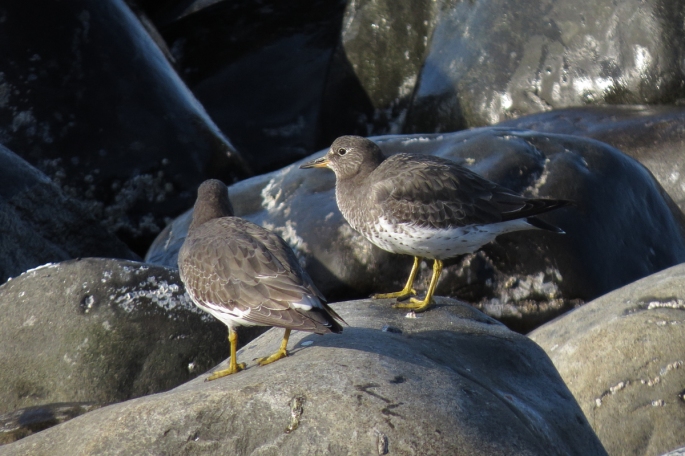 The Seaside Cove hosted several Surfbirds along with a flock of Black Turnstones. Both of these species are reliable at this site in fall and winter, but it still feels like a treat to find them every time I’m there.

The forecast for the next week calls for cool and rainy weather, so we shall see what changes that brings to the birding.

I taught two shorebird classes and led three shorebird field trips in August. The southbound shorebird migration has been pretty great so far, with unprecedented numbers of Baird’s Sandpipers and a nice smattering of rarities throughout Oregon. My trips missed the really rare stuff, but we had a nice variety of shorebirds.

The addition of a new family member with special needs (an adorable coonhound who was rescued from an animal testing lab) kept me from doing much birding outside of my classes. Leading trips does not usually allow for getting decent photos, but here are a few images from the month.

This Ruddy Turnstone was snoozing with the Black Turnstones at the Seaside Cove. 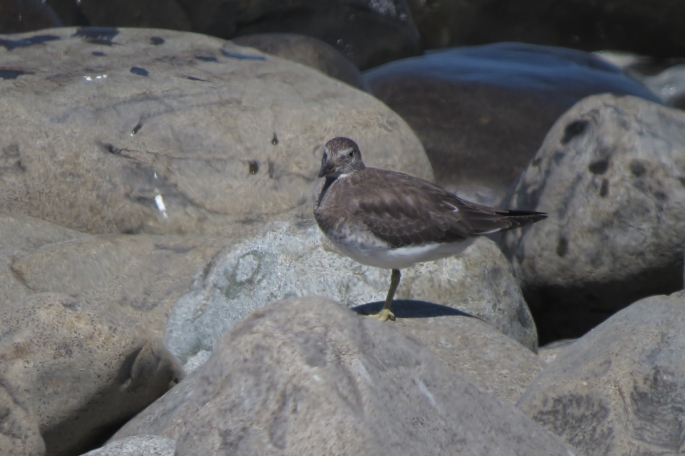 Surfbirds are another specialty of Seaside Cove 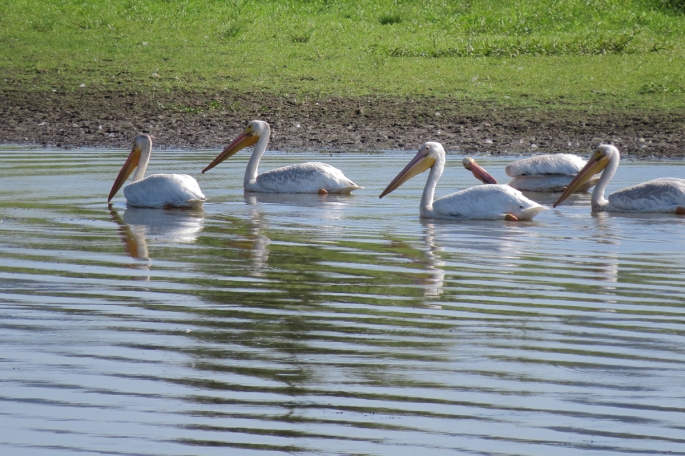 Not shorebirds, but always nice to see, this flock of American White Pelicans was at Fernhill Wetlands.

I have one more shorebird class at Jackson Bottom on September 24. I’m hoping this strong migration continues throughout the fall. Click on the Classes tab for more information. 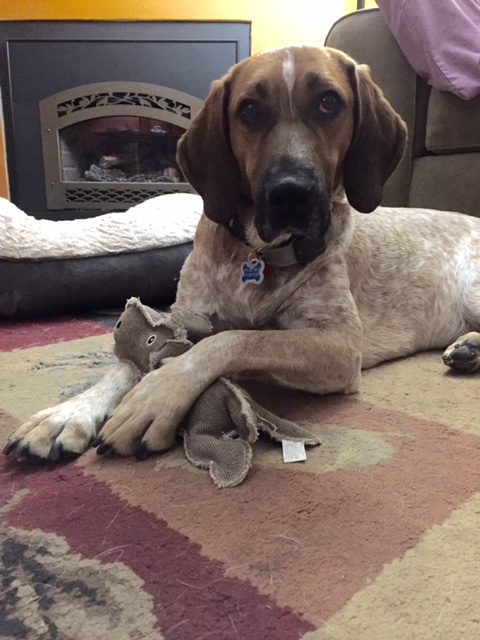 Not ready for birding yet, but perhaps someday Bohdi can join his sister Nala and me in the field.

I spent a cold but sunny day on the coast, from Seaside to the Columbia River. One of the best surprises of the day was this Black Phoebe at Millponds Park in Seaside. This species continues to expand its range northward, both along the coast and in the Willamette Valley.

While the ponds at this park are attractive to freshwater waterfowl like Ring-necked Ducks and Hooded Mergansers, the brushy areas hold good numbers of sparrows. Here is a Song Sparrow in the harsh sunlight. 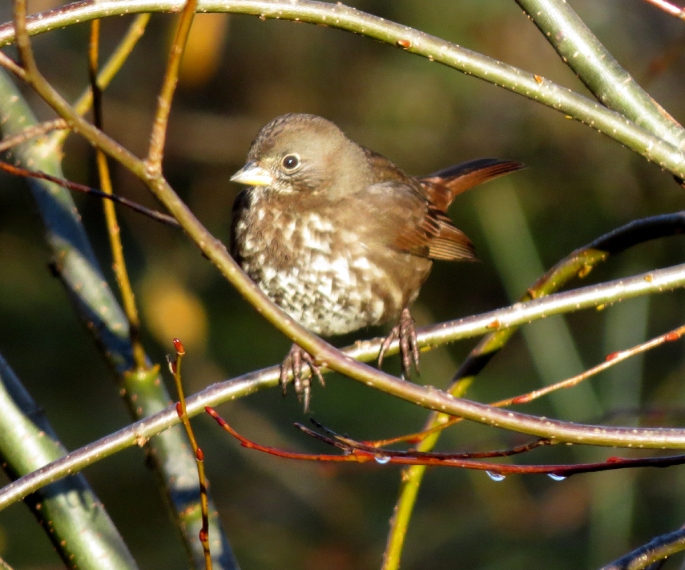 Fox Sparrows are common in the brushy areas. Unfortunately, my camera prefers to focus on the brush, rather than on the birds.

This lone Dunlin was the only shorebird I found at Fort Stevens. He was very tolerant of my presence. 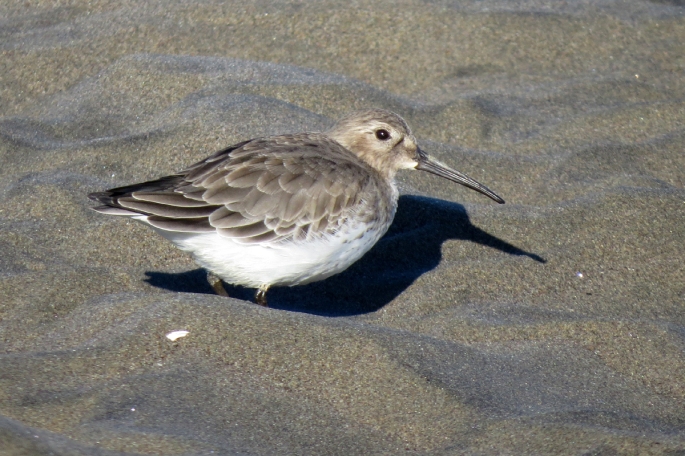 The same bird, blending in well with the sand

The Seaside Cove hosted huge rafts of birds; all three scoters, Greater Scaup, Western Grebe, and a single Long-tailed Duck. Most birds were beyond the breakers (aka beyond camera range), but this Red-necked Grebe came in close enough for a blurry photo. 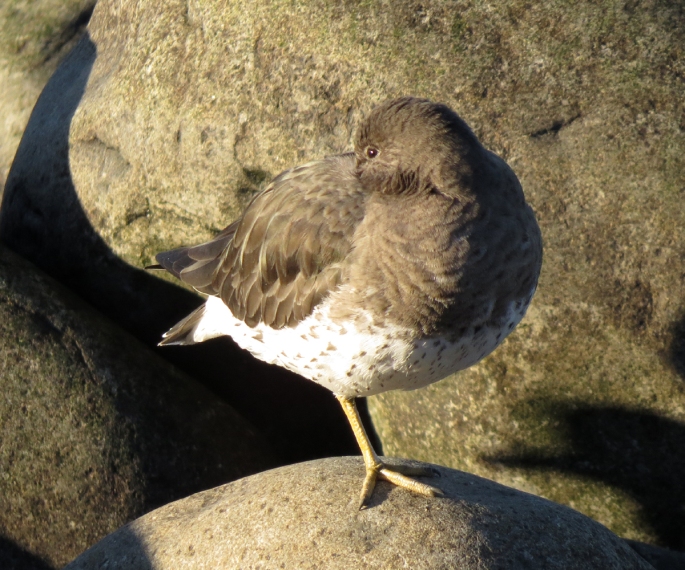 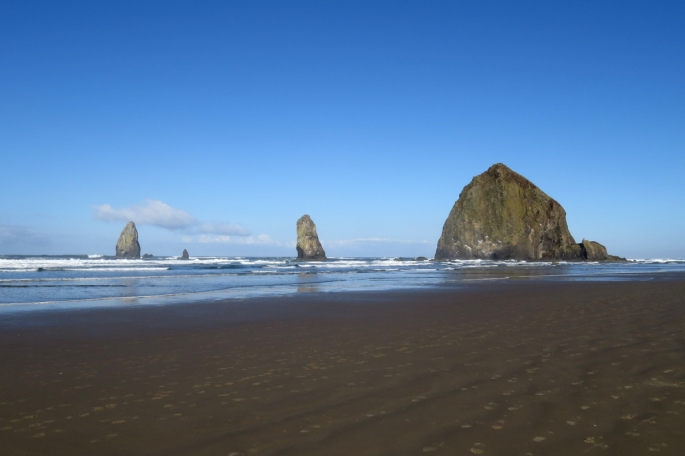 I spent a warm sunny morning around Cannon Beach and Seaside. The first stop was Silver Point, just south of Cannon Beach, for a sea watch. There were plenty of birds out there, way out there. It is what I call birding at the edge of imagination. You have an idea of what you are seeing, but realistically, there is a lot of guessing involved. I did see the wing flash of Sooty Shearwaters and several flocks of White-winged and Surf Scoters, but most of what I saw were unidentifiable specks. Nala was waiting somewhat patiently in the car, so we soon went to Tolovana Wayside and walked to Haystack Rock. 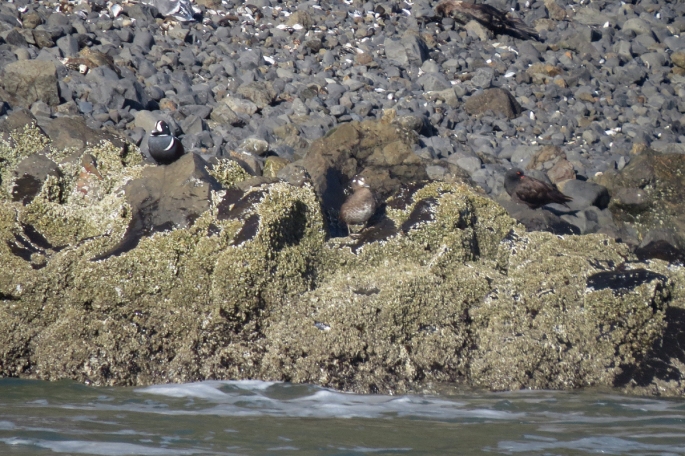 The tide was coming in, so I couldn’t get too close to the rocks. Still, you could see several Harlequin Ducks. Here is a male and female, with a Black Oystercatcher on the right. I didn’t see the Oystercatcher when I was in the field, only when I developed the photo. 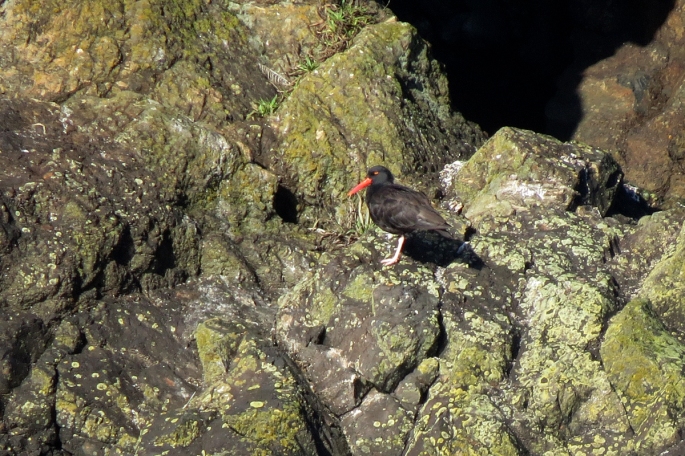 A log, which has obviously been in the water for a long time, had washed up on shore, and the American Crows were busy picking at the barnacles.

The next stop was the Cove, at Seaside. As is often the case, there was a nice congregation of Black Turnstones on the rocks. 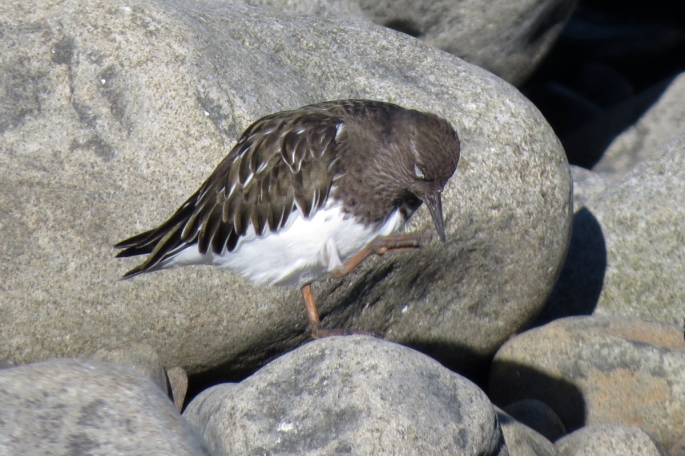 There were also good numbers of Surfbirds.

Our last stop was the Necanicum Estuary. This spot is very hit-or-miss, with either lots of birds or none. Today was closer to the latter. But along with the few California Gulls were several Caspian Terns still feeding young. Most Caspian Terns have already moved south, so it seems late to have begging fledglings still around.

I took my shorebird class to the north coast. We ended the day with 14 species of shorebirds, plus one that got away unidentified. Our first stop was The Cove in Seaside. The tide was very low so the birds were far away, but we still found a nice selection of rockpipers. Here is a large flock of Black Turnstones with a couple of Surfbirds. 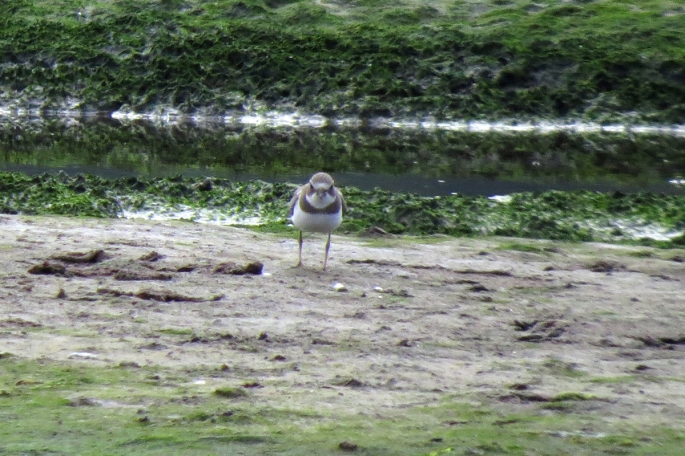 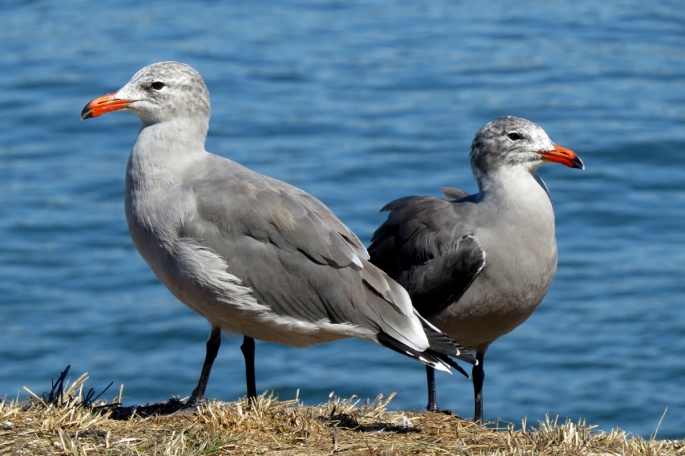 We visited the Hammond Boat Basin, hoping for Whimbels and Marbled Godwits. Instead, we had to “settle” for several hundred Heerman’s Gulls (above), along with Brown Pelicans and Elegant Terns. It was a lovely sunny day at the coast.

Here are a few more images from a recent trip to the coast.

Black Turnstone at The Cove in Seaside (Birding Oregon p. 121) 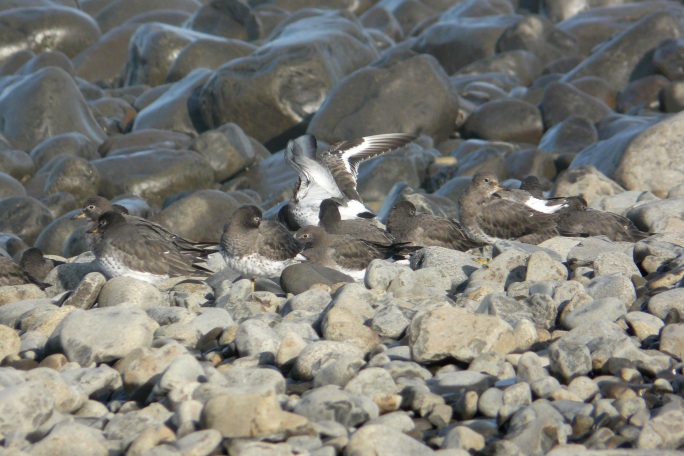 Surfbirds blend in with the rocks very well until someone opens their wings. 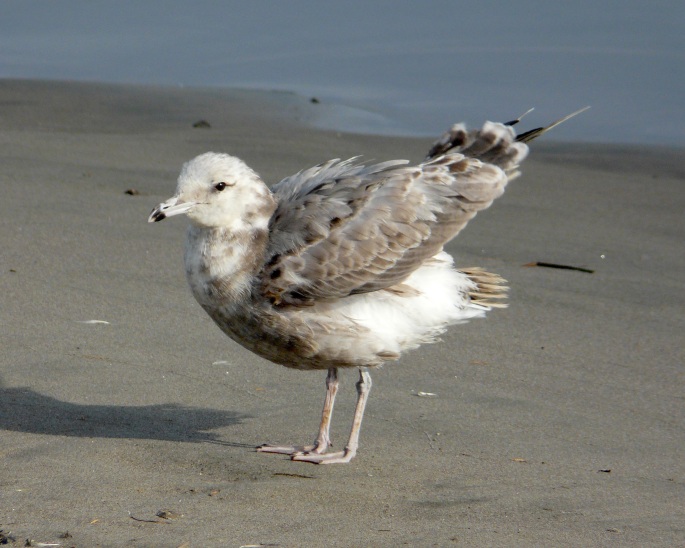 California Gull in extremely worn plumage. Notice how the primaries have worn down almost to the shaft.

Dragonfly on the water, Neawanna Wetlands 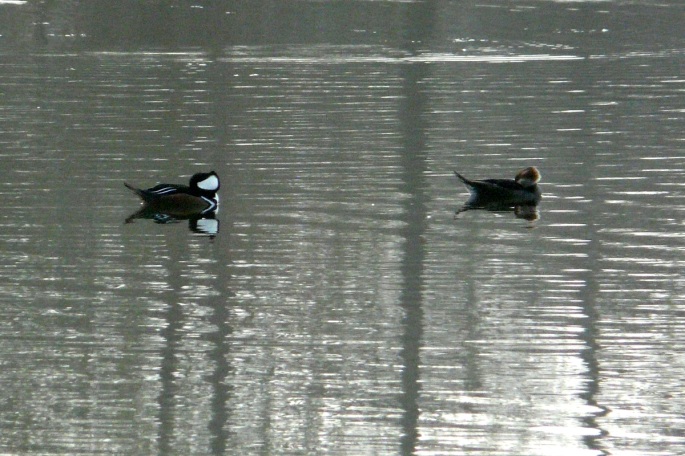