I spent a few days on the north Oregon coast to escape the New Year’s fireworks in Portland. As expected this time of year, there was plenty of wind and rain. But there were enough breaks in the weather to get out and enjoy some coastal birds.

Sanderlings are always a treat. This bird was squinting into the howling wind.

This time of year, the largest shorebird flocks are made up of Dunlin. 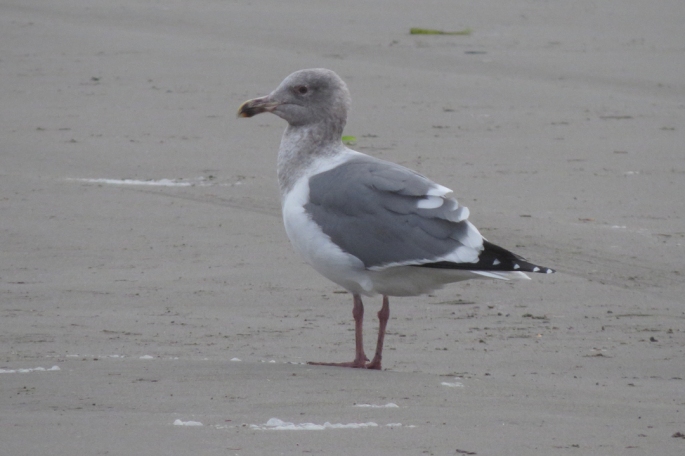 This gull caught my eye. The marbled pattern on the bill indicates a third-cycle bird. The dark mantle and black wing tips suggest Western Gull. The heavy mottled hood suggests some Glaucous-winged Gull in this bird’s ancestry.

I ran into a small flock of Snowy Plovers. This species is making a great comeback on the Oregon Coast after nearly being extirpated.

A flock of Snow Buntings was a special treat. The high winds kept the birds moving around and usually hunkered down in the beach grass, so I couldn’t get a clear photo.

A washed-up log hosted a colony of Pelagic Gooseneck Barnacles. These were actually quite lovely despite the strong fishy smell. The gulls were delighted to find these tasty snacks.

Bodhi and Nala love a good romp on the beach, despite the weather.

Most of my recent outings have been while leading trips or in dreary conditions, both of which limit any photo opportunities. So here are some dribs and drabs from recent weeks.

This Black-tailed Deer and her fawn were at Cooper Mountain Nature Park in Beaverton. There was a second fawn present out of frame. 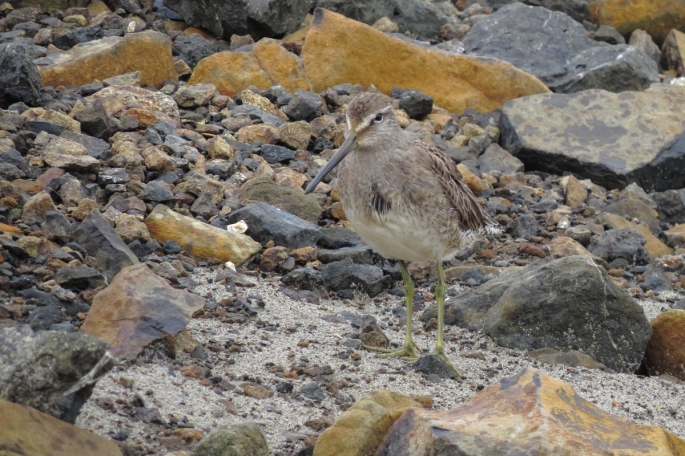 This Long-billed Dowitcher was blending in well with the rocks at Parking Lot C at Fort Stevens State Park. I often find shorebirds, usually Least Sandpipers or Dunlin, in this little patch of rocks. 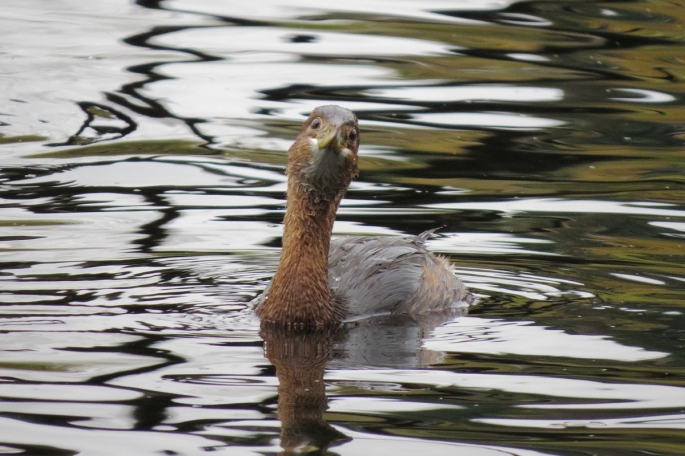 I saw this Pied-billed Grebe on a cloudy morning at Crystal Springs Rhododendron Garden. 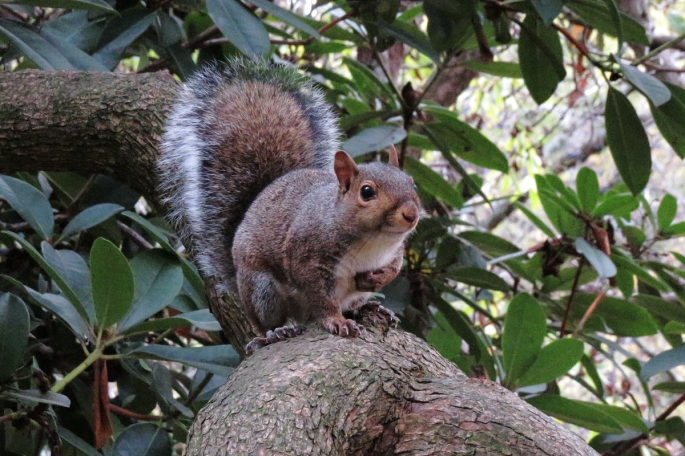 Sandhill Cranes have arrived in good numbers at Sauvie Island.

A young Bald Eagle flying by on Sauvie

This White-crowned Sparrow posed nicely in filtered sunlight along Rentenaar Road on Sauvie Island. This is a first winter bird, but he was singing from this perch for a while.

Most shorebird migration is long past, but this mixed flock of Dunlin and Long-billed Dowitchers were hanging out at the small ponds near the parking lot at Fernhill Wetlands.

Long-billed Dowitcher at Fernhill. This intense sunlight is certainly not the norm for mid-November, but the rains will return soon enough. 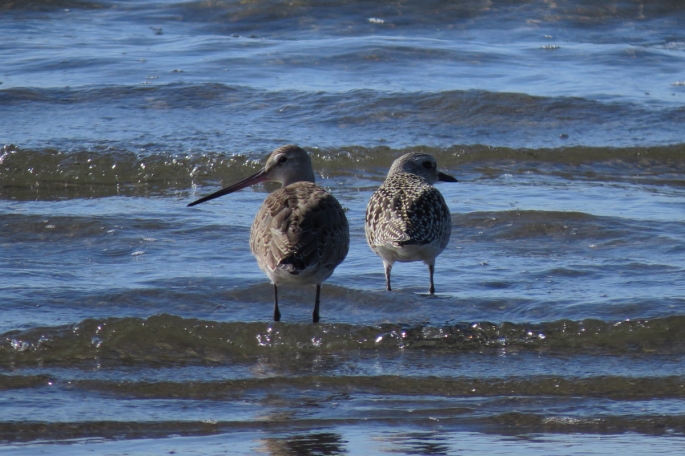 A Hudsonian Godwit has been hanging out at Fort Stevens for over a week now. This species, seen here with a Black-bellied Plover, normally migrates through the central part of the continent so an appearance on the west coast is a rare treat. 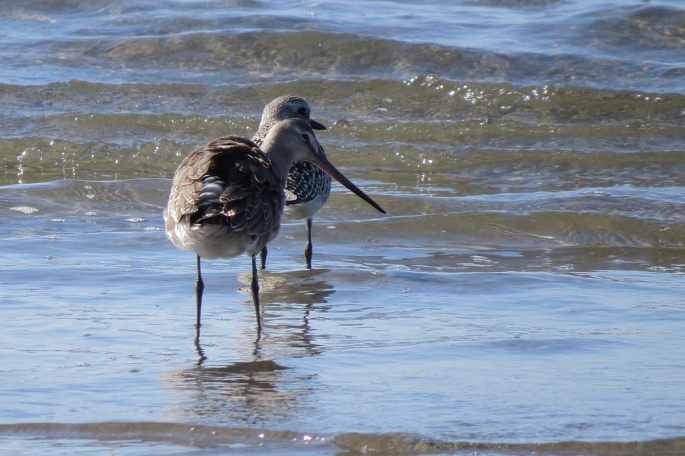 Here is a glimpse of the bird’s white rump, one feature that helps separate it from the expected Marbled Godwits. Other differences include the gray-brown coloration, dark underwings, bold wing stripe, and obvious pale supercilium.

Note how much yellow is present on one of these Black-bellied Plovers. This is apparently quite common on young Black-bellieds, but this is the first year I have seen it. These birds can be mistaken for American or Pacific Golden-Plovers at first glance, but the bulkier shape, thick bills, and different calls all point to Black-bellied Plover.

Other birds sharing the beach with the godwit and plovers included Sanderlings, 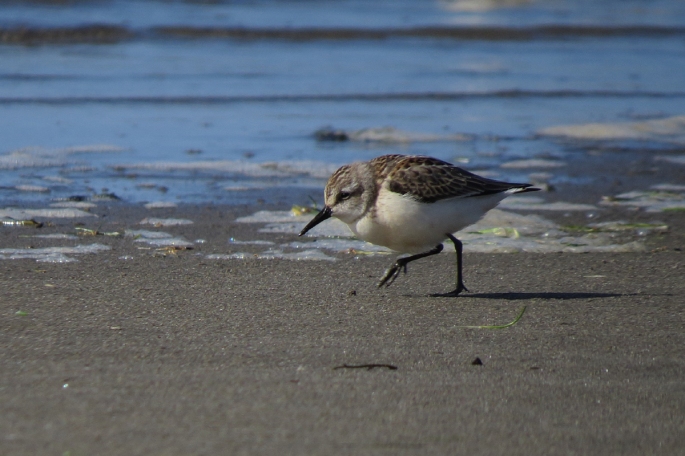 and Western Sandpipers. Notice the tiny bill on this individual, suggesting that the bird is a male. 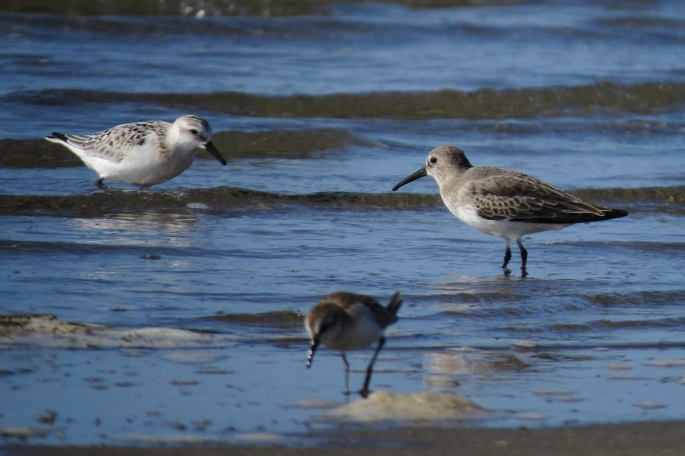 A recent trip to the coast on a sunny and windy day resulted in these images of shorebirds using rocky habitats. Two of these species are usually found on rocks, but the other two are not. I wonder if the blowing sand had driven these birds to the relatively sheltered rocky areas.

Least Sandpipers are hard to spot among the rocks. This bird was part of a small flock near the jetty at Fort Stevens. 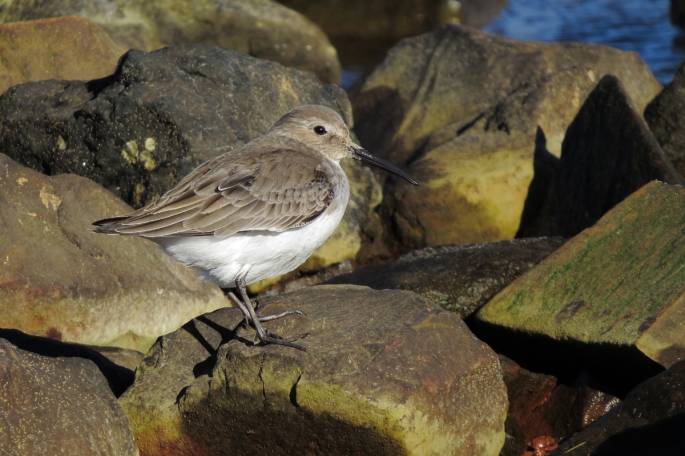 This Dunlin was hanging out on a line of rocks near the same jetty. I have seen Dunlin here before. 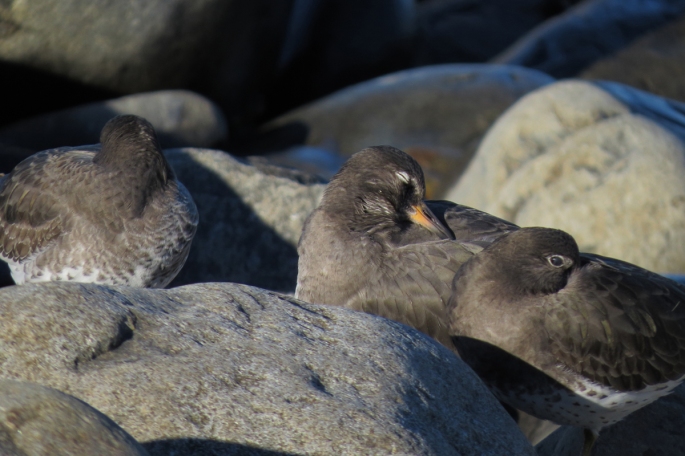 Surfbirds at the Seaside Cove. Their color closely matches the dry basalt boulders.

Black Turnstones are common winter residents at the Seaside Cove.

While we continue to get above-average rainfall in the Portland area, there have been a few dry days of late, so I ran out for a quick tour of Fernhill Wetlands. Most of the wintering geese are gone, and there are signs that spring is slowly making progress.

Yellow-rumped Warblers, both Audubon’s and Myrtle (shown) races, are coming through in large numbers.

Red-winged Blackbirds are in full song and are staking out territories. 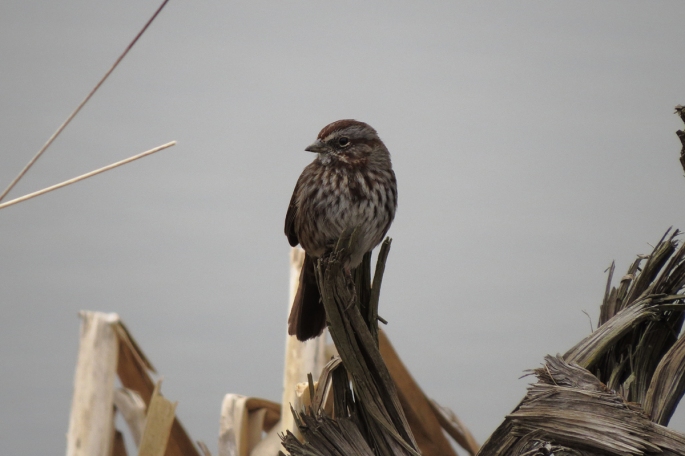 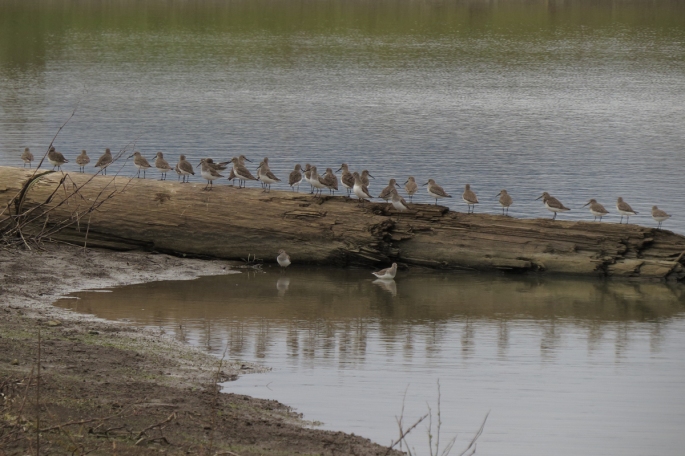 A flock of Dunlins was using this log to get out of the mud for a while. They were all still in winter plumage. Dunlins are one of the first species to arrive in spring.

Spring shorebird migration peaks in late April/early May. There is still room in my shorebird class with Portland Audubon April 27/29. 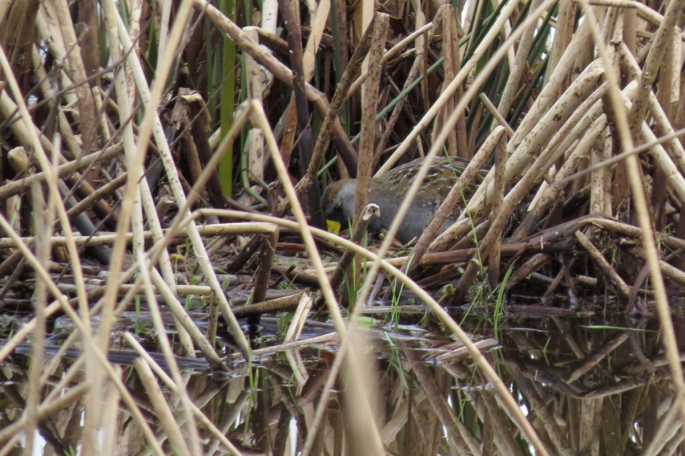 This Sora was being typically elusive.

The red currants were is full bloom, attracting both Anna’s and Rufous Hummingbirds.

The Weekday Warblers birdathon team made its inaugural trip on May 12. We birded the north coast from Cannon Beach to Fort Stevens, with a stop at the Sunset Rest Stop on the way. We did well with seabirds and shorebirds, but were sorely lacking in upland species. A few tweaks to the route and a longer day would probably get us a bigger list, but we had a great time with great weather and ended the day with 80 species. 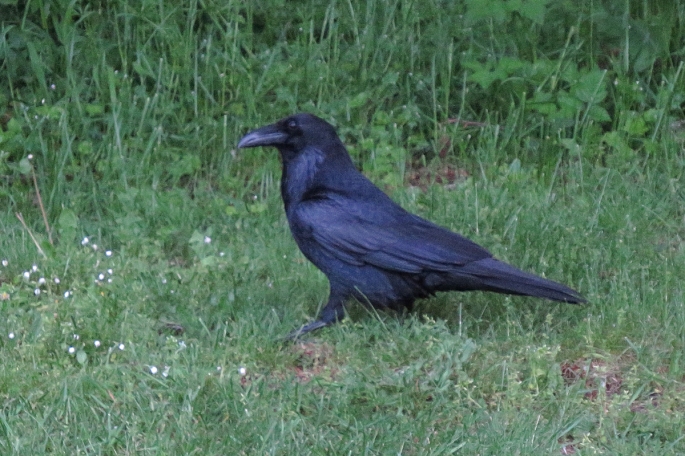 This is one of a couple of Common Ravens who were hanging out in the parking lot of the Sunset Rest Area.

One of many Whimbrels seen on the beach

This flock of Bonaparte’s Gulls was flying around the South Jetty at Fort Stevens.

We made two quick stops at The Cove in Seaside. Most of the few birds that were there were quite a ways out, requiring lots of squinting through a scope, but this White-winged Scoter came close to shore for some nice views.

The best find of the day was the large shorebird flock on the beach at Fort Stevens. The Oregon Coast does not usually get huge numbers of migrant shorebirds. Birders joke about he Shorebird Dome that covers the coast, forcing birds to fly directly from northern California to Gray’s Harbor, Washington. But this past week the dome was breached and good numbers and diversity of shorebirds worked the beaches of the north coast.  We found these birds mid-afternoon, so the sun was already in the west causing terrible lighting for photos. But this will give you an idea. The photo above shows a Western Sandpiper with two Dunlin.

Red Knot, a rare treat along the Oregon coast

A great day on the Oregon coast.

I led a couple of tours for the Birding and Blues Festival last weekend. The weather was dry and reasonably warm, despite rather vicious afternoon winds on the beach.

North winds brought good numbers of migrating shorebirds close to land. Shorebirds often bypass Oregon beaches on their way to Grays Harbor in Washington, so it was nice to find a big flock feeding right across from our hotel.

The flock was mostly Dunlins and Western Sandpipers, but their were a couple of Semipalmated Plovers in mix. (but not in this photo)

These Red-breasted Mergansers were at Clay Meyers State Natural Area. 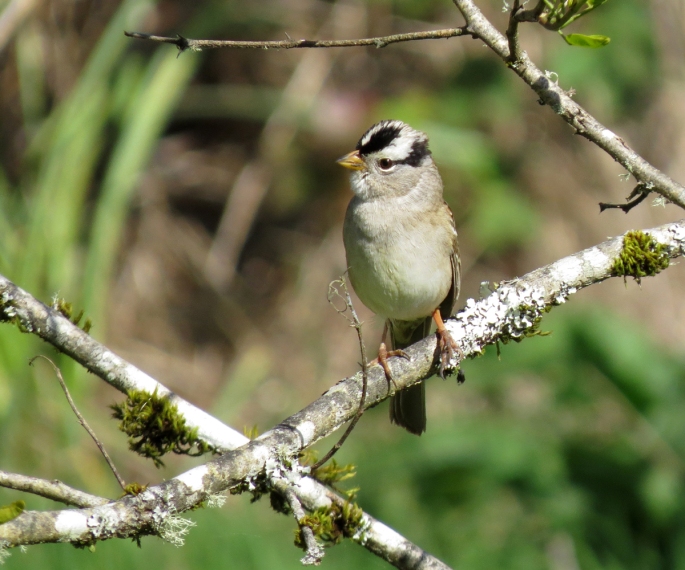 Eurasian Collared Doves are pretty easy to find in Tillamook County. This one was singing behind the community center in Pacific City.

The view from Cape Lookout. It is unusual to see the ocean looking blue instead of steely gray.

It had been ages since I visited the coast, so I packed up the dog to check out some spots between Cannon Beach and the Columbia River. I have seen an increasing number of these signs in the area, an attempt to attract nesting Snowy Plovers back to the area. I hope it works. 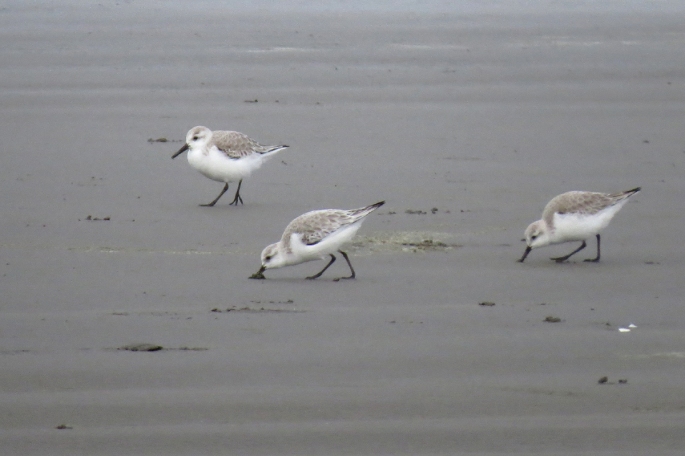 On the beach at Gearhart, I saw more Sanderlings than I have seen in many years. I don’t know whether the population has rebounded a bit, or if I just timed my visit with a good wave of early migrants. We’ll hope it is the former.

There was a small flock of Dunlin at Gearhart, and a much larger flock at Fort Stevens. None had started molting into spring plumage yet. 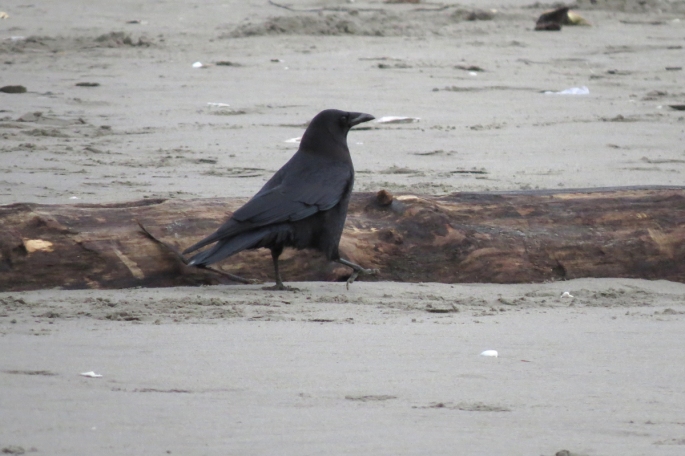 American Crow on the beach. There were a few Common Ravens around, too, but they usually don’t allow a close approach.

I found two mixed flocks of gulls. The gull numbers around Portland this winter have been very disappointing, so it was nice to see a good variety of species on the beach. Since I had Nala with me, I couldn’t get close enough to identify everyone. This little group is mostly California, with a couple of Mews and possible Thayer’s.

The best gulls of the day were Black-legged Kittiwakes. This species is usually found out to sea, so it is nice whenever they come to shore. Here is an adult in the middle of the frame. 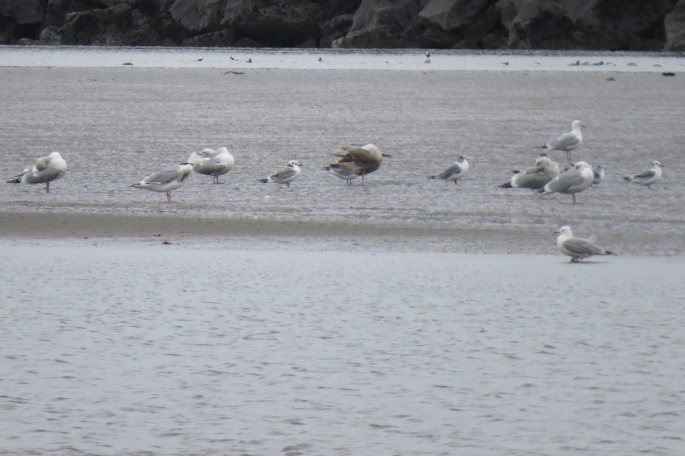 A first-cycle Black-legged Kittiwake near the center, with a dark auricular patch and a black bar across the back of the neck.

This Western Gull seemed very dark compared to the other gull seen that day. I think she might be of the southern subspecies. 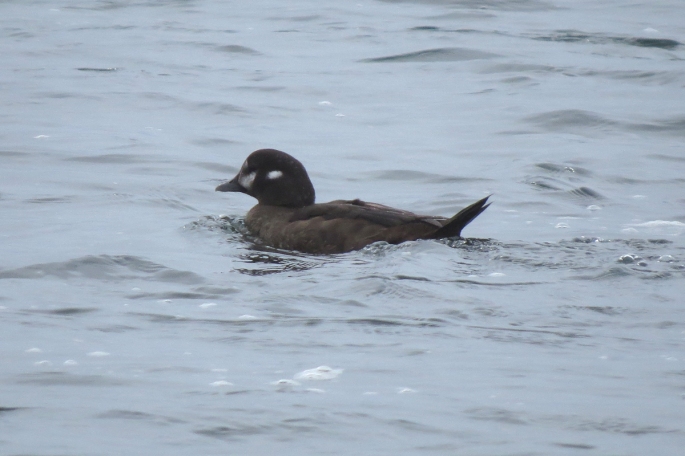 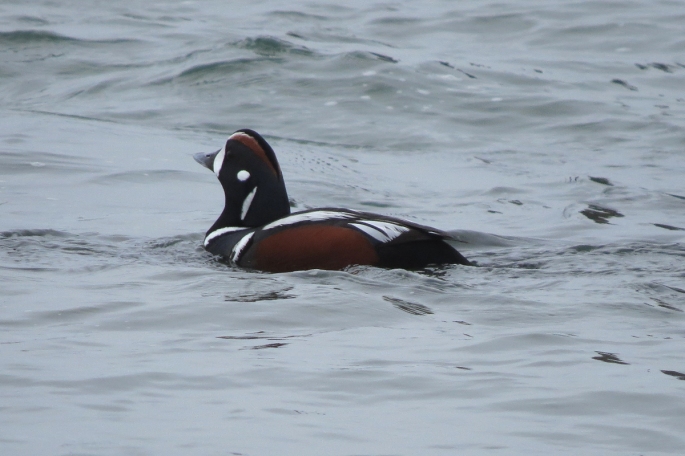 When the tides are right, the area around Parking Lot D at Fort Stevens State Park can be very productive.

On my recent visit, I found about 400 Caspian Terns in the bay. Many of the birds were presenting fish to their lady loves, and a few were rewarded accordingly (nudge, nudge, wink, wink). A Bald Eagle would occasionally take a pass at the flock, sending the terns off in a big swirling mass, but the birds would quickly settle down again. 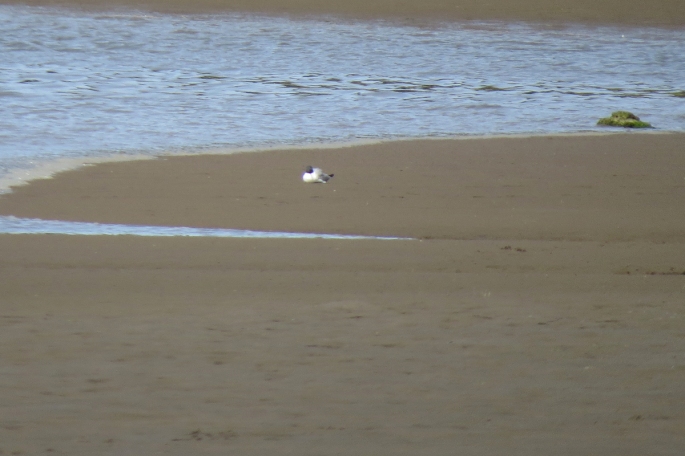 One of my favorite birds of the day was this breeding plumaged Bonaparte’s Gull. I watched the bird fly in and settle on the mud flat. I snapped a couple of frames from a great distance, planning on getting better views. But, as is often the case, the bird took off before I could get any closer.

Over the past few years, this site has been become a productive spot for shorebirds. The spring shorebirds migration is well past its peak, but there were still a few birds around. This little flock was actively feeding along the shore, so I sat on my knees in the sand and waited for the birds to come to me. Shorebirds are very wary of people standing upright, but if you sit down, or better yet, lie down, the birds will come quite close.

This blurry Dunlin was the only member of her species in the flock. 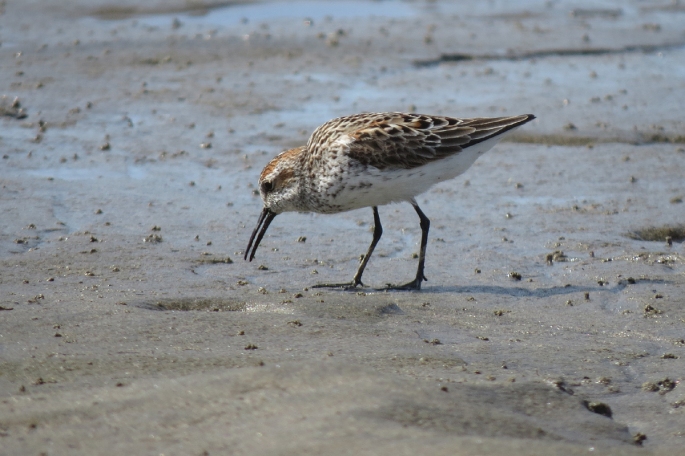 Semipalmated Plovers made up the bulk of this flock. 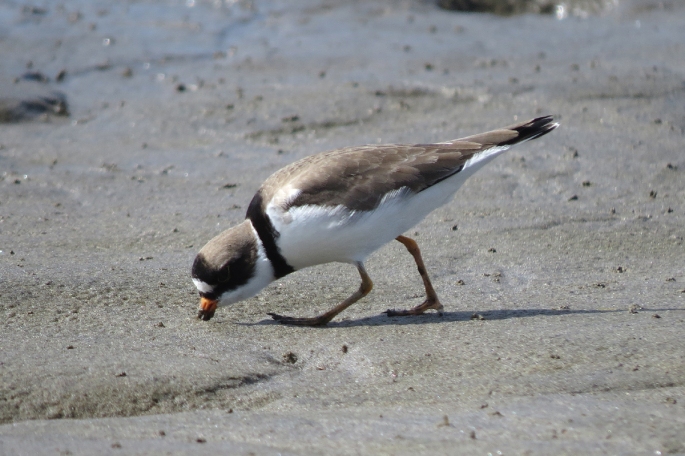 While the spring shorebird movement is about done, the southbound migration begins in about six weeks, so we don’t have too long to wait for another shorebird fix.

I had hoped to get to the coast this week, but a big weather system was blowing in so I  visited Fernhill Wetlands and Jackson Bottom. Both sites had a few shorebirds sporting their breeding plumage. 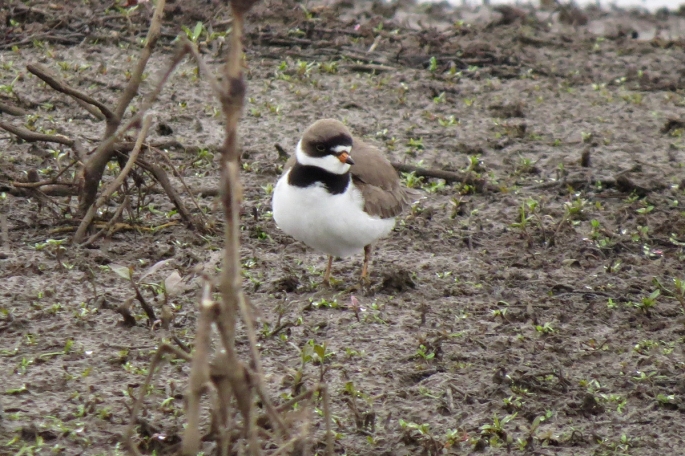 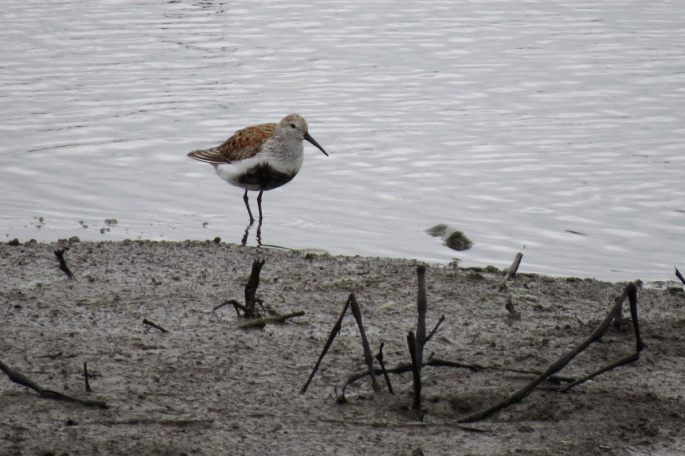 Long-billed Dowitchers at Jackson Bottom. The sticks in the foreground are willow stakes planted by Clean Water Services. As these willows grow, they form a canopy over the mud flats, making the habitat useless to migrating shorebirds. Birders have been complaining about the practice at this site for years, to no avail.