Record-setting heat and cloudless days are not the best conditions for birding or photography, but here we are. It is sometimes hard to motivate oneself to get outside when the weather is so harsh, but there is always something to see. So here are some images from a warm walk around Fernhill Wetlands. 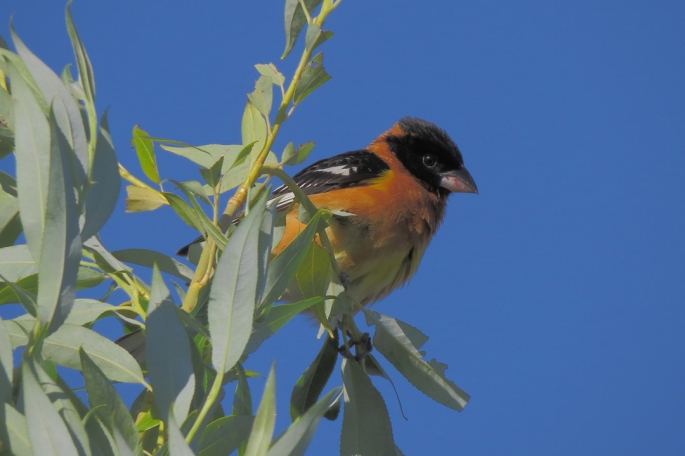 Black-headed Grosbeaks are one of our more attractive summer residents.

Lots of babies have already fledged. Here a Red-winged Blackbird is being harassed by a hungry youngster.

It has been such a delight to have an active Purple Martin colony at Fernhill the past few years. 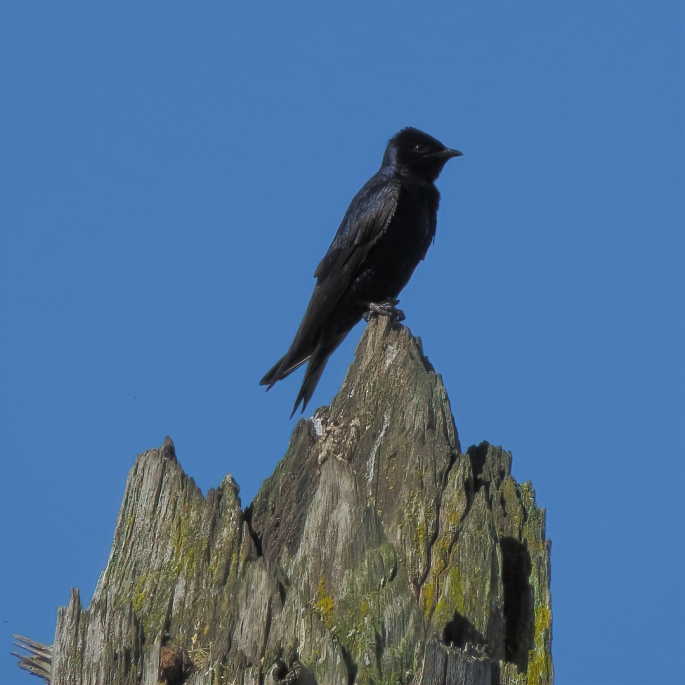 Purple Martin on an unclouded day

Ospreys were soaring high over Fernhill Lake. I didn’t see any dive for fish while I was there. 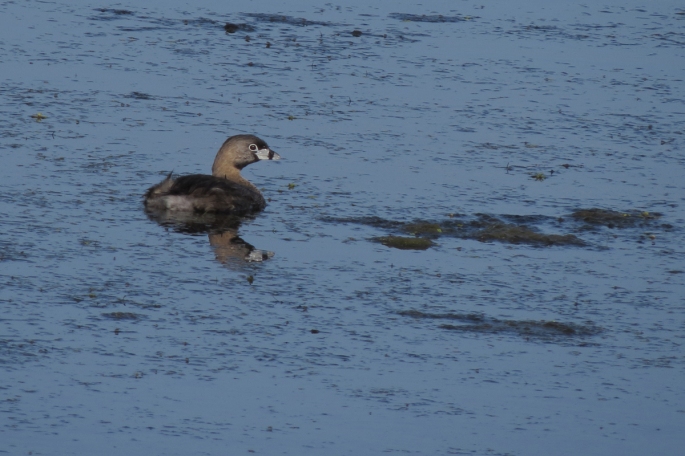 The ducks have started their summer molt, but the Pied-billed Grebes are still looking dapper.

A lovely Mourning Dove on an ugly fence 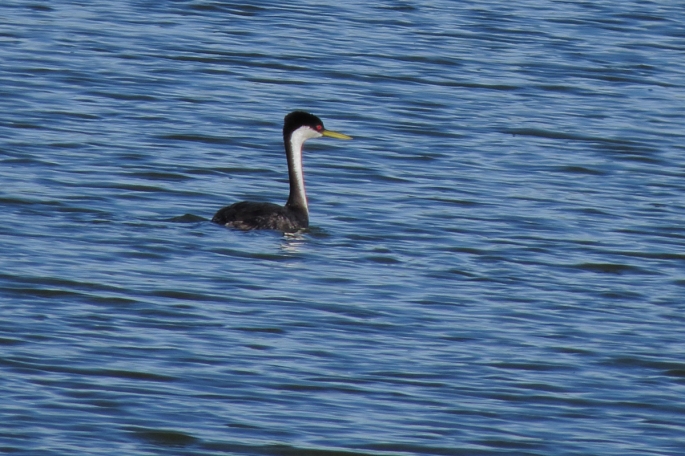 The most unusual bird of the day was this Western Grebe. They are frequent winter visitors here, but they do not nest anywhere nearby.

Southbound shorebird migration has already begun, so expect them to show up soon.

I am not sure why the hottest days of mid-summer are referred to as “dog days.” My dogs want nothing to do with the heat, and the hot weather puts a damper on bird activity as well. Wetlands tend to be a little more active than woodlands this time of year, so here are some recent images from area wetlands.

This Purple Martin is from the colony at Fernhill Wetlands. The recently installed nesting boxes there have been a great success.

Tree Swallows are everywhere. It is nice to find one perched on a stick instead of on a nest box.

Ospreys on the nest at Jackson Bottom 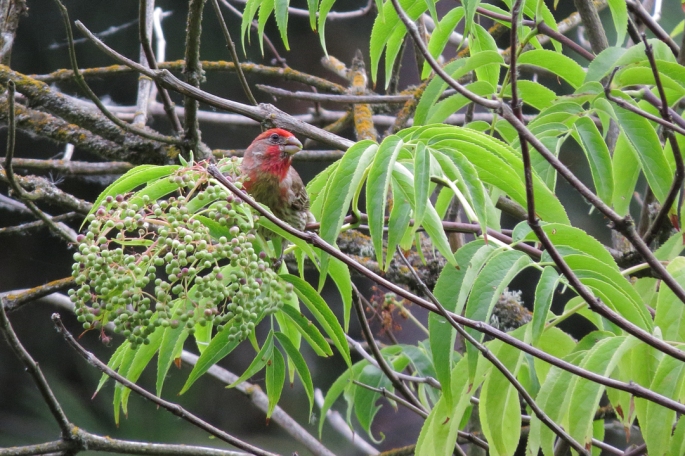 This House Finch was feeding on green Elderberries at Smith and Bybee Wetlands.

Spotted Towhee at Smith and Bybee

Bewick’s Wrens seem to be very fond of dust baths this time of year.

It is baby crow season. These youngsters were exploring the shallow waters of a slough at Smith and Bybee.

It is harder to find herps in the hot weather. This Northwestern Garter was stuck in a vault for a water shut-off valve. I lifted him out and sent him on his way.

This is a very small, very thin Long-toed Salamander (note the insect parts nearby for scale). 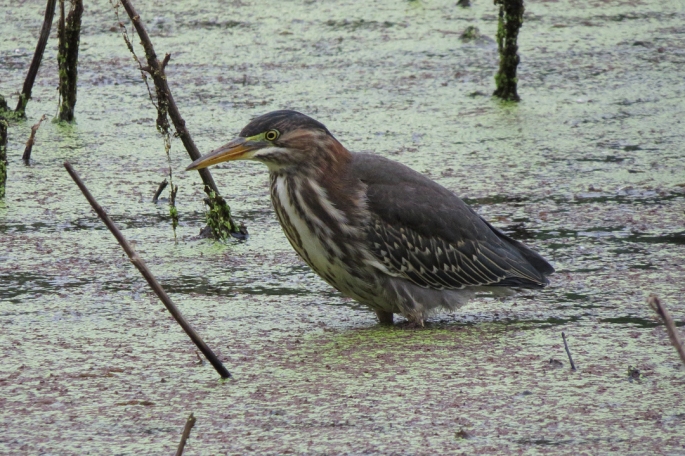 Smith and Bybee Wetlands is thick with Green Herons right now. There were at least a dozen in this little slough.

Shorebird migration is starting to pick up. Unfortunately, there is very little mudflat habitat in the Portland area right now. This Greater Yellowlegs was one of several sharing the slough with the Green Herons. 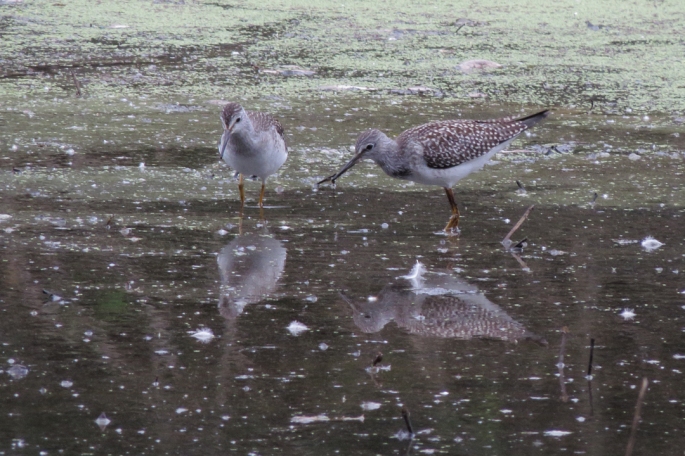 Three Lesser Yellowlegs were also present at Smith and Bybee.

On the home front, we were treated to three baby Western Screech-Owls playing in the back yard. Two of them perched on the rope holding the sunshade and tried to untie the knots. It was almost too dark to see, so this is the best image I was able to get (6400 ISO). Pretty adorable. 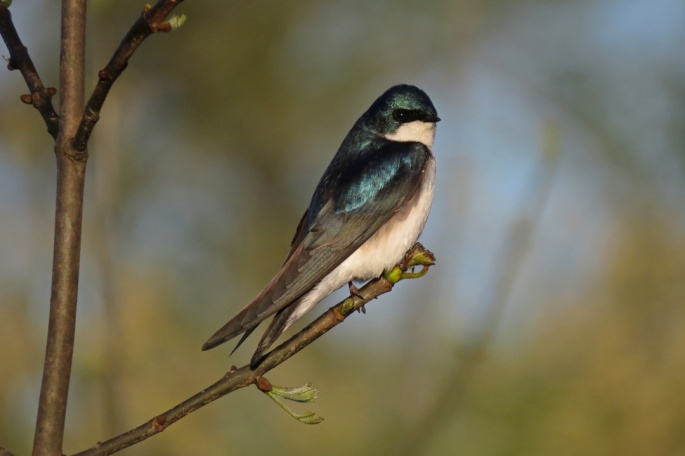 Jackson Bottom is another site that I can visit during the pandemic, assuming I get there early. The big push of spring migration has not hit, but you can tell it’s so close. Tree Swallows have been back for quite a while now. They are usually perched on the many bird houses at this site, so it was nice to catch a couple actually using a tree.

The Savannah Sparrows are setting up territory. This would have been a nice shot if I could have caught a reflection in the bird’s eye.

This Osprey spent a lot of time preening while I was there. He still looks pretty disheveled.

Anna’s Hummingbird, just high enough that I can’t get a good flash from his gorget

I’m still waiting for shorebirds to show up. Greater Yellowlegs have been the only arrivals so far.

Some Killdeer have started nesting already. 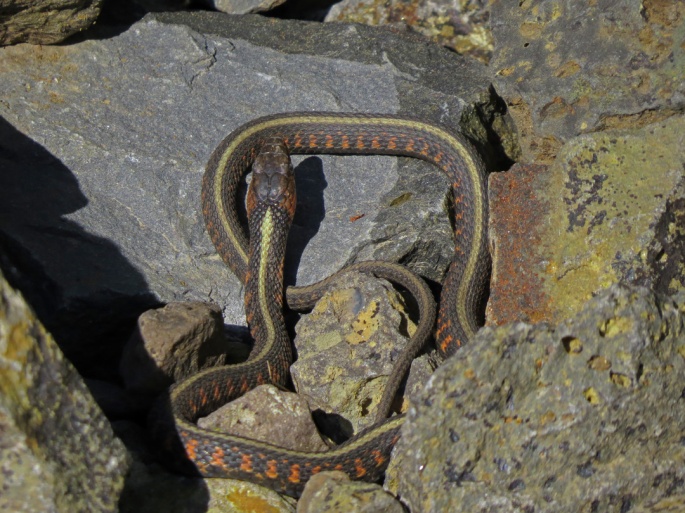 Several Common Garters (Red-spotted) were sunning themselves on this rock pile.

This garter had propped her body up against a log to better catch the morning sun.

I don’t remember seeing Camas at Jackson Bottom before, but they were in full bloom on this trip.

Not much going on bird-wise for me this past week. The shorebird cornucopia from the previous week has dried up, as have many of the region’s mudflats.  But, as I frequently remind myself, there is always something to see. 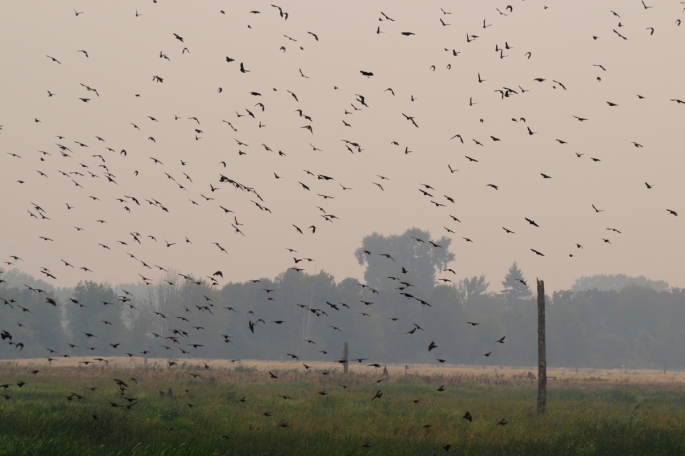 This is a flock of Red-winged Blackbirds at Fernhill Wetlands during the Birds and Brew Festival on August 22. East winds had brought in smoke from the many wildfires burning in eastern Oregon and Washington. The sky and white and you couldn’t see any of the hills that surround this site. 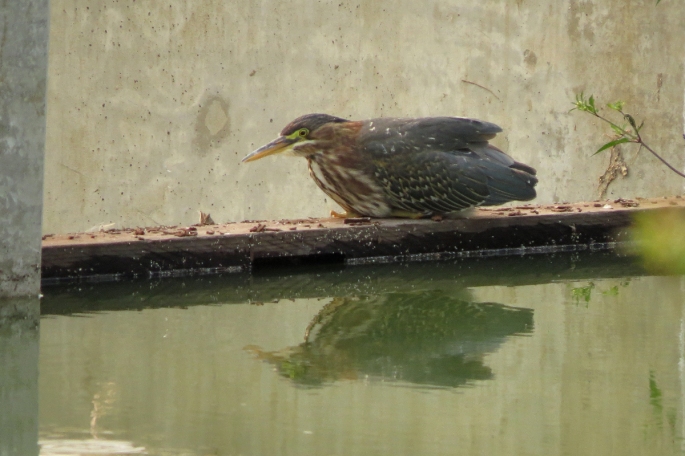 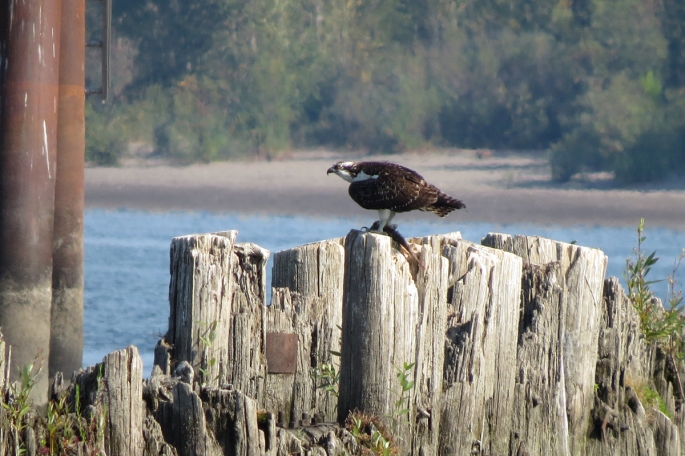 On a clearer day, Nala and I found this Osprey at Kelly Point Park along the Columbia River. 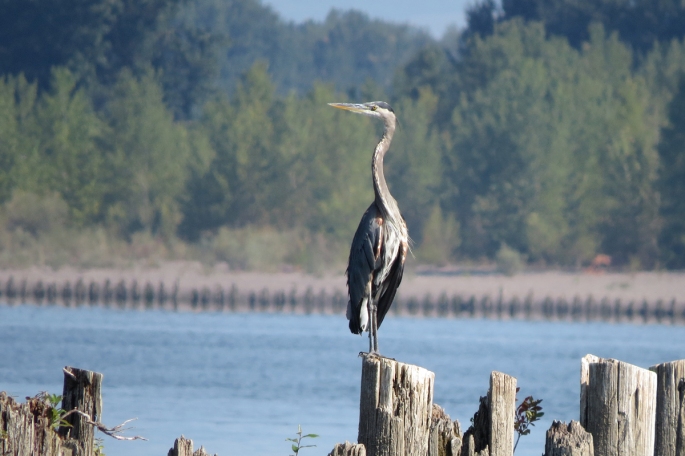 Banded Killifish in the Columbia River. They are about an inch and a half long. 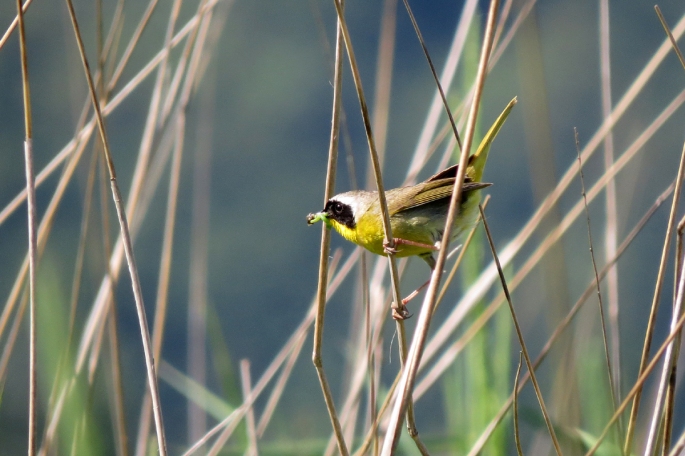 Nala and I spent several hours hiking (and swimming) at the Sandy River Delta. Local nesters, like this Common Yellowthroat, were busy gather food for nestlings.

Male Lazuli Buntings were very vocal, and seemed to be vying for the attention of the females (below).

Osprey flying along the Columbia River 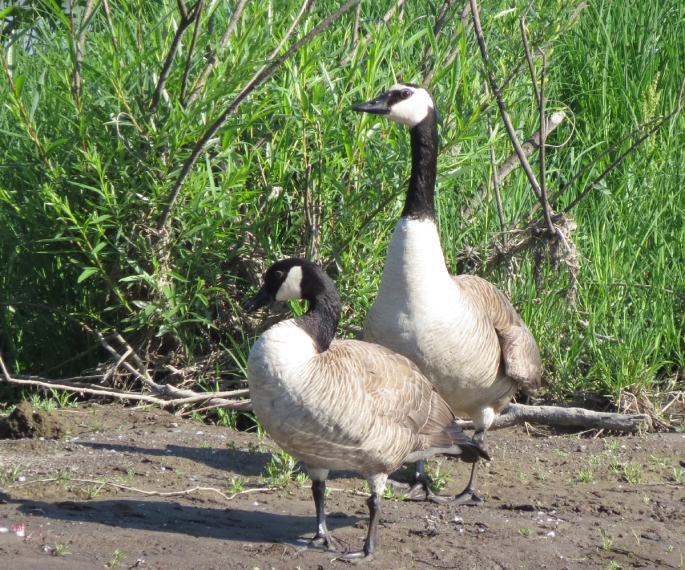 This Western Canada Goose had an unusual head pattern, with white reaching across the forehead and around the nape.

This pair of Ospreys is nesting on a piling along Sauvie Island Road. The elevation of the road provides an eye-level view of the nest. Note the piece of blue plastic. 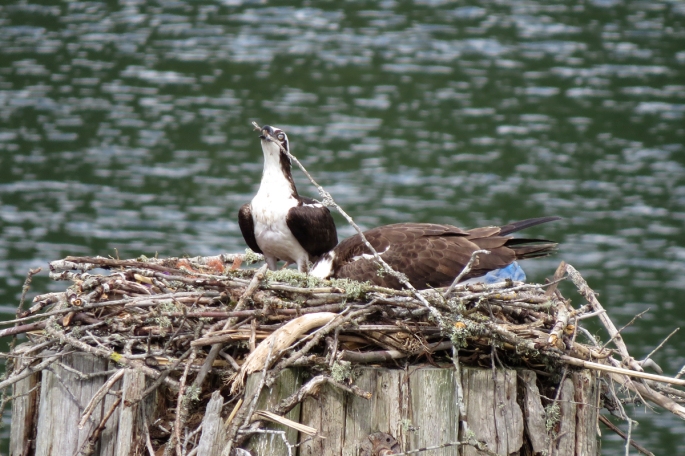 The female is sitting on eggs, so she remained pretty still the whole time I was there, aside from from making a few adjustments. Meanwhile, the male was bringing additional sticks and continued to build the nest around her.

While I was watching the Ospreys, this young American Crow flew in carrying a Cedar Waxwing, landed on a log, and proceeded to eat. I don’t know if the crow actually caught the waxwing or happened to find a dead one, but the crow didn’t hesitate to chow down and had the waxwing consumed in about one minute.

I am aging this bird as a youngster by the pale color on the bill and the scaly pattern on the back.

On a less gruesome note, a pair of Barn Swallows was building a nest in the observation platform on Reeder Road.

This is a view from the end of Rentenaar Road, lots of flowers and Great Egrets.

The Osprey nest along Rentenaar Road is occupied again.

We just had our wettest March on record, so water levels are high. This is the view from the end of Rentenaar Road. The white speck on the lake is an American White Pelican. White Pelicans have become increasing common on Sauvie Island in recent summers, but sightings this early in the year are unusual.

Here is the same bird coming in to land.

I take my LBB class to Sauvie for the abundance of sparrows. (We ended up with ten species of sparrow on our trip.) Here is a White-throated Sparrow, one of the rarer species in our area.

This Fox Sparrow was bathing in a puddle. 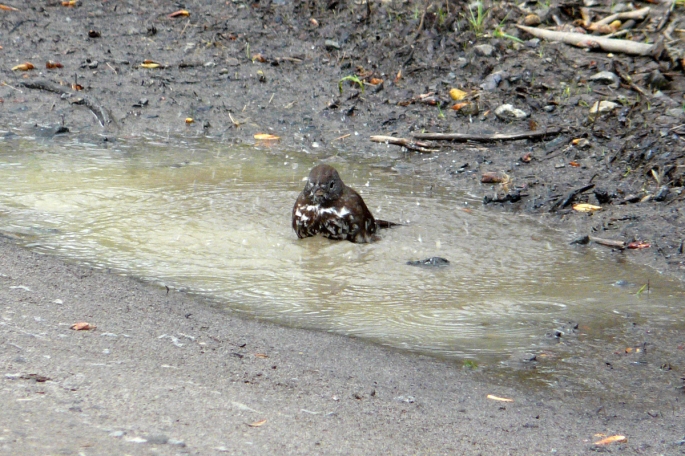 Scouting for and leading two field trips for my Little Brown Birds class gave me opportunity to bird Rentenaar Road on Sauvie Island (Birding Oregon p. 57) three mornings in a row. It was interesting to see how the species list varied each day. It served as a reminder that every birding trip, no matter how often you cover the same spot, has the potential for something new.

The Ospreys that nest on this platform have returned within the past week. This was the only species that seemed willing to pose for the camera.

This location is one of the best in the Portland area to study sparrows this time of year. Between the two field trips, my class saw ten species; Golden-crowned, White-crowned, White-throated, Harris’s, Song, Fox, Lincoln’s, Savannah, Dark-eyed Junco, and Spotted Towhee. Many of these birds will have moved on in the next few weeks.

Sauvie Island (Birding Oregon p.55) is best known for wintering waterfowl and raptors. While the summer birding seems quiet compared to the multiple thousands of geese and Sandhill Cranes seen on winter visits,  there is always something to see.

Ospreys nest on platforms provided for them, as well as on utility poles and dead trees.

This California Quail was surveying his domain from a fence.

It seemed odd to see this Black-headed Grosbeak feeding in weeds along the roadside, a considerable distance from the nearest tree.

Some lovely weather at last. I walked along Rentenaar Road on Sauvie Island today. Many of the geese have moved on, but there were still a few good flocks of Cackling Geese and Sandhill Cranes.

A pair of Ospreys are working on a nest. There is a platform built for them just a few yards from this spot, but these birds prefer to build on the power lines.

This individual was eating a fish while the other tended the nest.

Two Coyotes were sniffing around in a pasture. I never get tired of watching these guys.