I have made four trips to the Oregon Coast in as many weeks this spring. For three of the four, I was leading groups. That, combined with rainy weather, limited my photo opportunities, but here are a few shots. The big news on the coast this spring was a Laughing Gull and at least four Bar-tailed Godwits. I missed these birds, but as I like to tell myself, there is always something to see.

Rainy skies at Ft. Stevens. The wreck of the Peter Iredale is visible in the center of the photo.

It was fun to see this Red-breasted Merganser hauled out on a rock at the Netarts boat launch. I don’t see them out of the water very often. 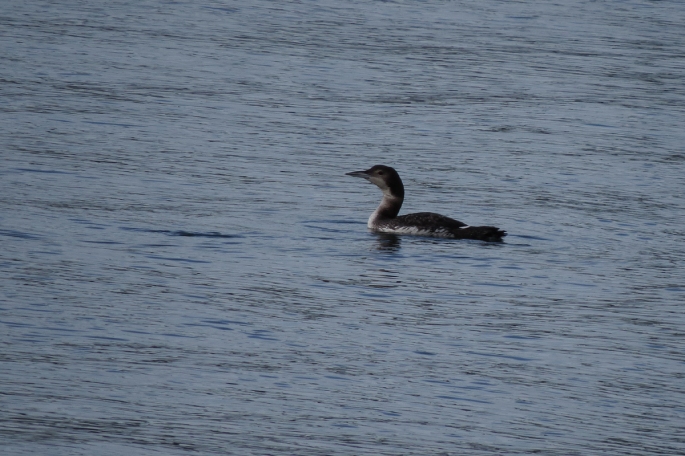 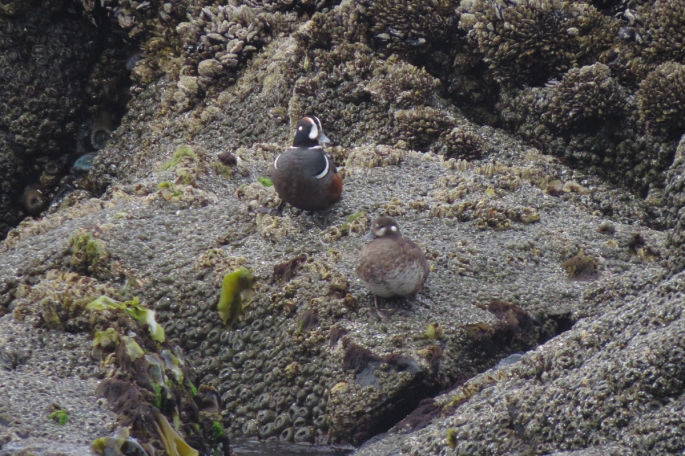 Sanderling have been one of the more common migrants along the coast this spring. 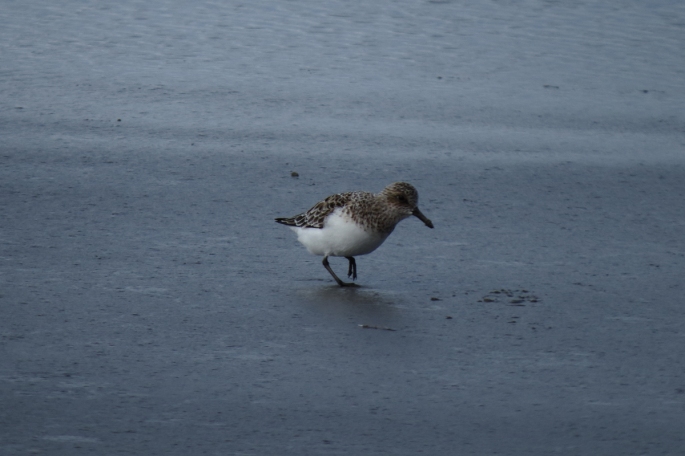 Black-bellied Plover, with a Sanderling in the background

Broughton Beach is along the Columbia River, right next to the Portland airport. It can be a challenging place to bird, with dogs and children chasing the birds, police carrying body bags down the beach, etc. But if you catch it on a good day you can find some excellent birding. The great attraction this past week was a Pacific Golden Plover, which spent two days there, avoiding me with great success (thus that specie’s designation as one of my nemesis birds).  I tried for the plover twice with no luck, but found several other goodies along the way.

The most unexpected species was this Red Phalarope. At first glance, I wrote this bird off as a Red-necked, since Reds are very unusual inland in August, and Red-neckeds are expected. Once I looked at the photographs, however, I saw my error and got a good reminder to LOOK AT THE BIRD! That heavy bill with the light-colored base is a dead giveaway for Red Phalarope.

Another coastal species along Broughton Beach was Sanderling.

It is nice to see Sanderlings at inland locations, since you can often get closer to them there than you can at the coast.

Another nice find was this Semipalmated Sandpiper. You can see the partial webbing between the outer toes that gives this species its name. Ten years ago, a Semipalmated Sandpiper anywhere in Oregon was a pretty big deal, but now quite a few individuals are reported every year. Either the bird has become a more common migrant in this state, or people are just better at recognizing them.

as were Least Sandpipers.

California Gulls like to hang out on a little sand spit that extends into the river at low tide. A few Glaucous-winged Gulls have arrived, and will become more common as autumn approaches. 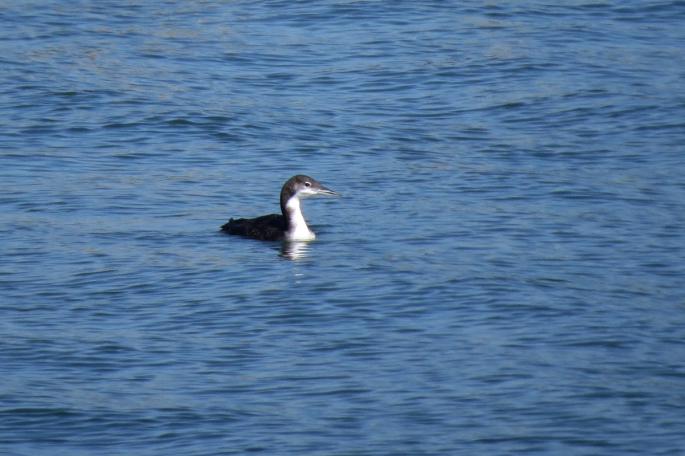 This Common Loon seemed a little out of place for August. In the winter months, this species is often seen at this site with large rafts of grebes and diving ducks. There are fewer kids and dogs then, too.

Yaquina Bay, at the town of Newport, is one of the more productive sites on the Oregon coast. On this visit, high winds reduced the number of birds that were out and about, but there was still a lot to see.

Common Loon with the catch of the day 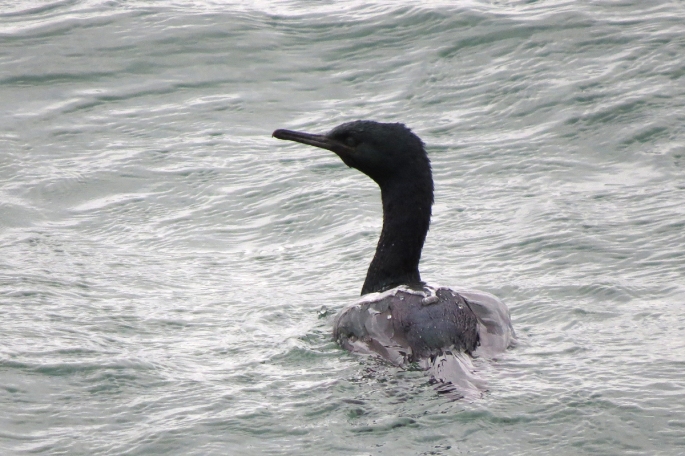 Horned Grebe (above) and Western Grebe 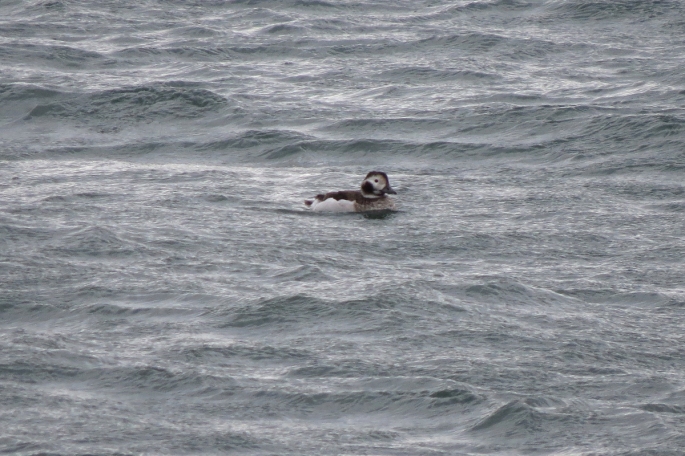 The flats behind the Hatfield Marine Science Center. There were lots of Mew Gulls, some Brant, and Northern Pintails. Note the Peregrine Falcon at the base of the fallen tree. 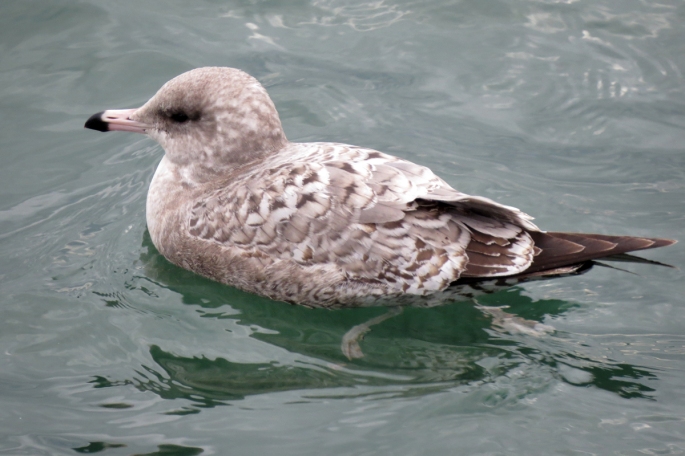 Large numbers of California Sea Lions loaf on the jetties and docks on the bay.

I spent just over a week along the coast of Maine, visiting sites between Ellsworth and Cutler. It is always fun to get reacquainted with eastern bird species and to hike in the boreal forest. 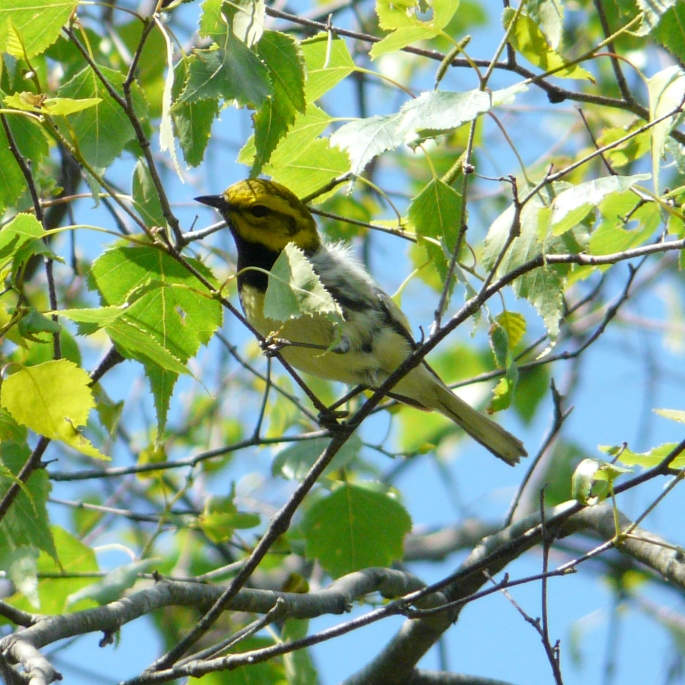 I saw 14 species of warblers on this trip. The vast majority of birds I saw were male, presumably because the females were on nests. Their small size, active habits, and dense habitat take them beyond the realm of point-and-shoot photography, but I managed to capture useuable images of two species. Black-throated Green Warblers were by far the most common species. 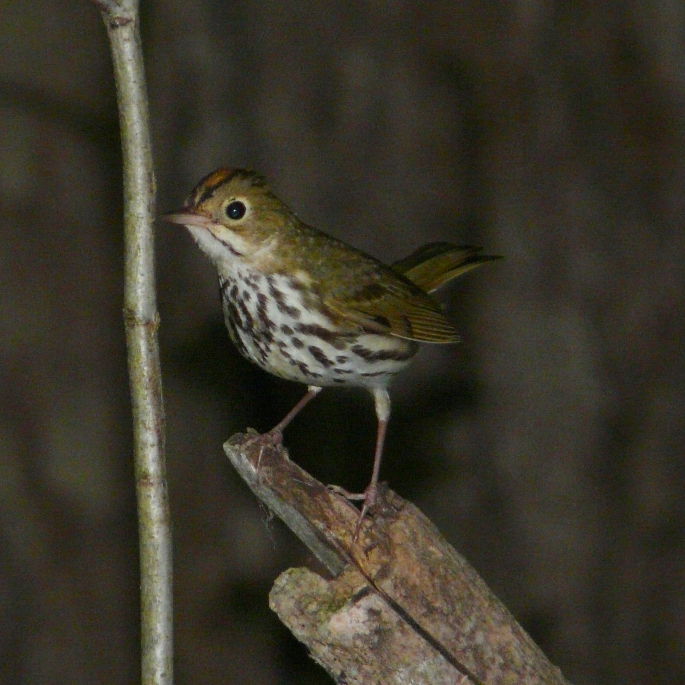 This Spruce Grouse was at Petit Manan NWR. She had several downy chicks with her. The chicks are actually capable of flight, and flew into dense cover when startled. The adult remained on foot, keeping an eye on me and making contact calls to keep her brood together. 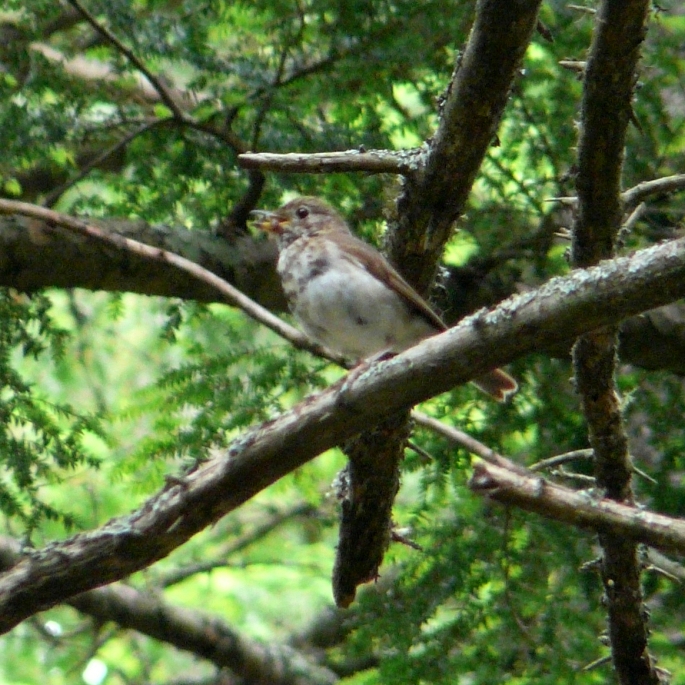 Hermit Thrush, calling with a bill full of food for nestlings. 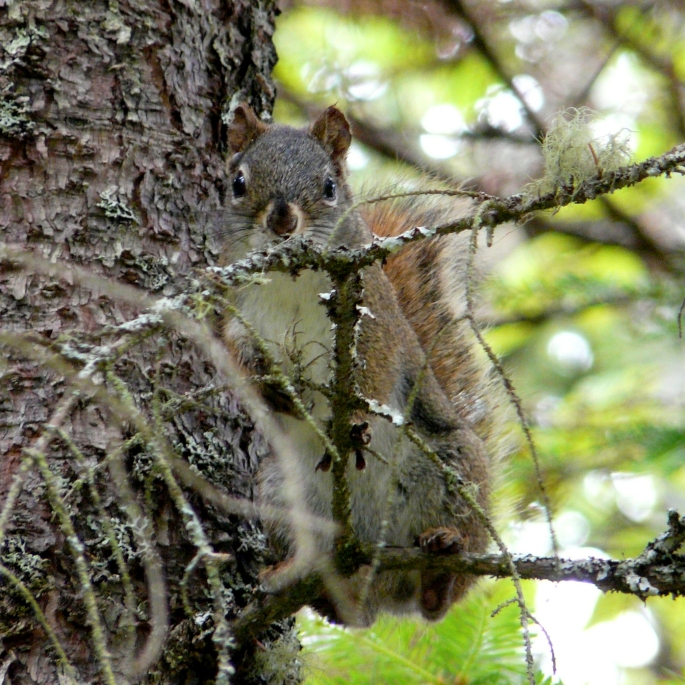 Red Squirrels were common and noisy in wooded areas. 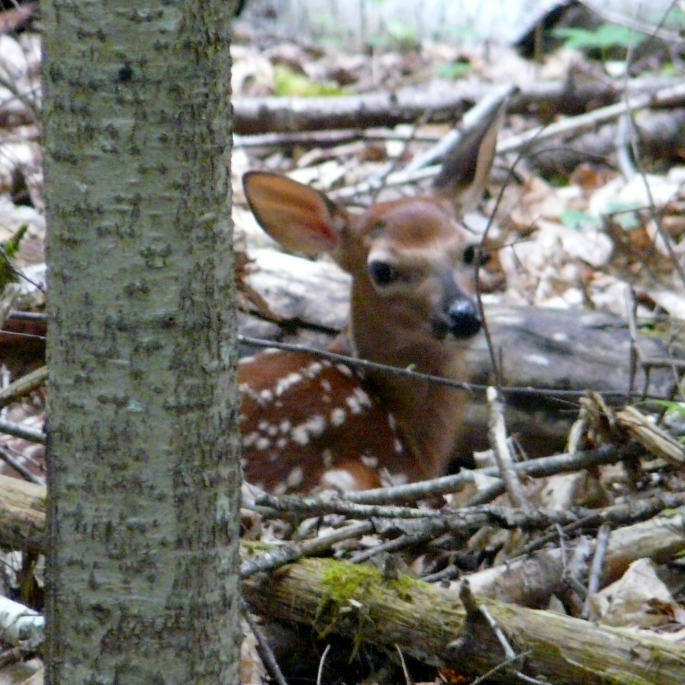 This White-tailed Deer fawn was well-hidden in the woods. I only located her because she got up to take a stretch just as I was looking in that direction. 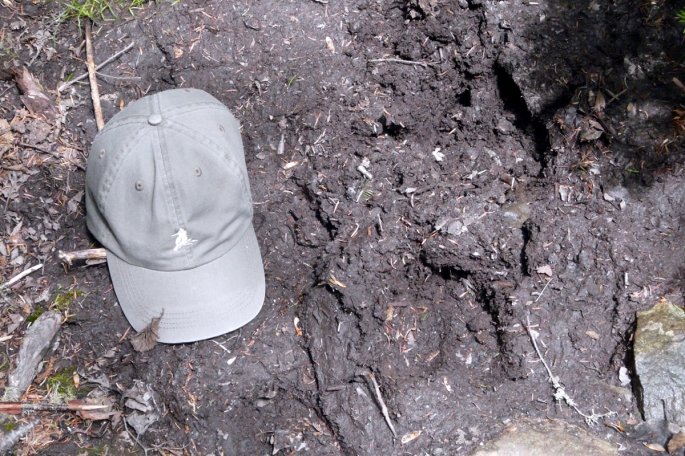 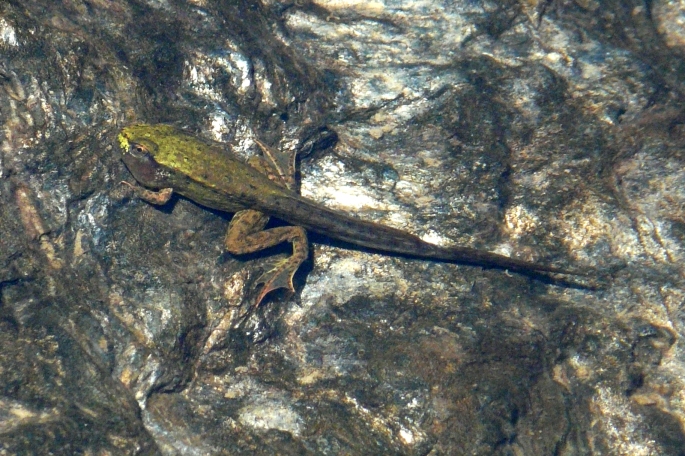 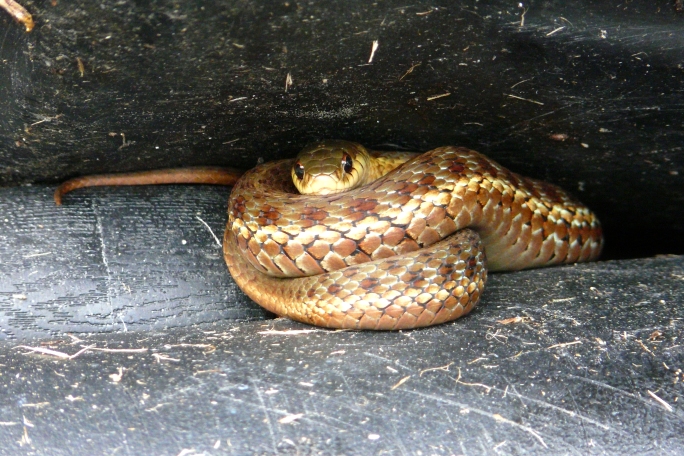 This Eastern Garter spent much of the day basking beneath a compost bin.