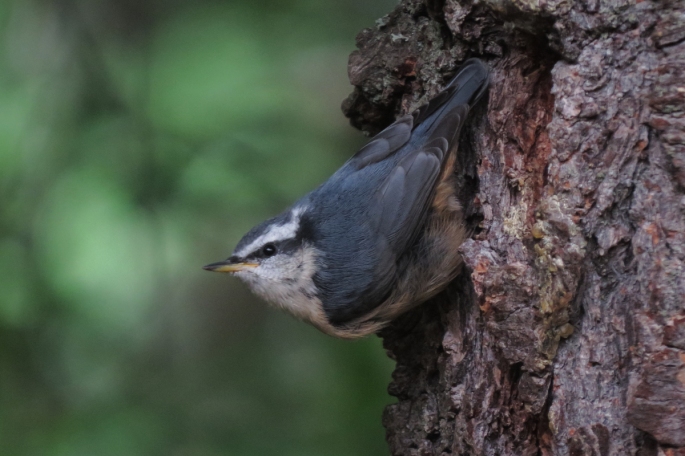 It has been six months since I joined the Five Mile Radius movement, concentrating on finding as many species of birds as possible within five miles of my home. My 5MR has a pretty good mix of habitats. I have access to several small wetlands, mature woodlands, and a small stretch of the Willamette River. Some species I missed in January are very likely to be seen in November or December. Without working too hard, I would expect to find 150 species this year. That is not great compared to coastal sites or sites with a better mix of habitats, but not too bad for an inland site predominated by high-density housing and shopping centers. The benefits of the 5MR are many, and have been lauded by myself and others. But it has slowly dawned on me that, in some ways, my 5MR has made me a bad birder.

Like many birders, I have worked my 5MR hard, exploring new sites and repeatedly visiting the better ones in the circle. I have only birded outside my 5MR four times all year, twice for classes I was teaching, once for leading a birding trip for a church group, and once for Portland Audubon’s Birdathon. No one has forced me to stay in my circle, but when you introduce such a challenge to someone with a borderline obsessive/compulsive personality (a.k.a. a typical birder), that imaginary border can be hard to cross.

So far this year, I have found eight species of shorebird in my circle. That is not terrible. But by not going to the coast for shorebird migration this spring I have missed out on the large flocks of Whimbrels and Marbled Godwits that feed in the surf, the uncommon Red Knots and Ruddy Turnstones, and the adorable Semipalmated Plovers. I missed my best chance for finding a Pacific Golden Plover, one of my nemesis birds.

It is not just the coast that I have neglected. I did not visit Mt. Tabor, one of the better spots for spring migrants in the Portland area. I didn’t bother chasing several unusual birds in Portland simply because they were outside my 5MR and I didn’t need them for my state list.

I have let the competition of the 5MR interfere with my larger birding goals. This really hit home when an Eastern Phoebe turned up on Sauvie Island and remained at a reliable location for a couple of weeks. An Eastern Phoebe is not a sexy bird, rather dull in fact. But it is a species I haven’t seen in Oregon and one that is very rare in the state. My main birding goal is to see 400 species in Oregon. I am close, but there are not enough regularly occurring species that I haven’t seen for me to reach this goal; I need vagrants. I am not much of a chaser, so when a vagrant shows up in the greater Portland area I really can’t afford to pass it up. But I let the phoebe go. It would have eaten up the limited time I had to bird during those two weeks, and it was out of my circle.

Not only have my birding locations changed, but so has my birding behavior.

I am normally fairly conservative in my birding. I don’t count birds unless I am very sure of the ID. My number estimates for eBird are always on the low side. When birding my 5MR, I have found that my standards for ID have relaxed a bit. I am still reasonably sure of my IDs, but if I “need” a particular species for my circle, I am slightly more inclined to call the ID even if the view is not ideal or if there is some doubt.

On three occasions this year, I have used audio playback in the field, either to elicit a response from a bird or to verify an ID. I don’t do this. I have prided myself in not risking the undo harassment of birds by playing their songs in the field, especially during breeding season. Somehow my birding ethics have weakened.

So this relationship with my 5MR has turned a bit sour. The 5MR is great. There are lots of advantages to concentrating on my circle and I chose to invest my efforts there, but I think I need to see other birding sites. I need to reconnect with some local areas that lie outside my circle, great birding sites that I have neglected this year. I need to go farther afield to visit different biomes; the mountains, the high desert, the coast.

I will continue to try to rack up a good total for my 5MR. But I am going to spend more time enjoying the great avian diversity that Oregon offers, keeping my ID skills sharp and increasing my familiarity with species that I don’t get to see every week. I am still not a big chaser, but I need to appreciate the opportunities that come my way.

2 thoughts on “My Love/Hate Relationship with My 5MR”